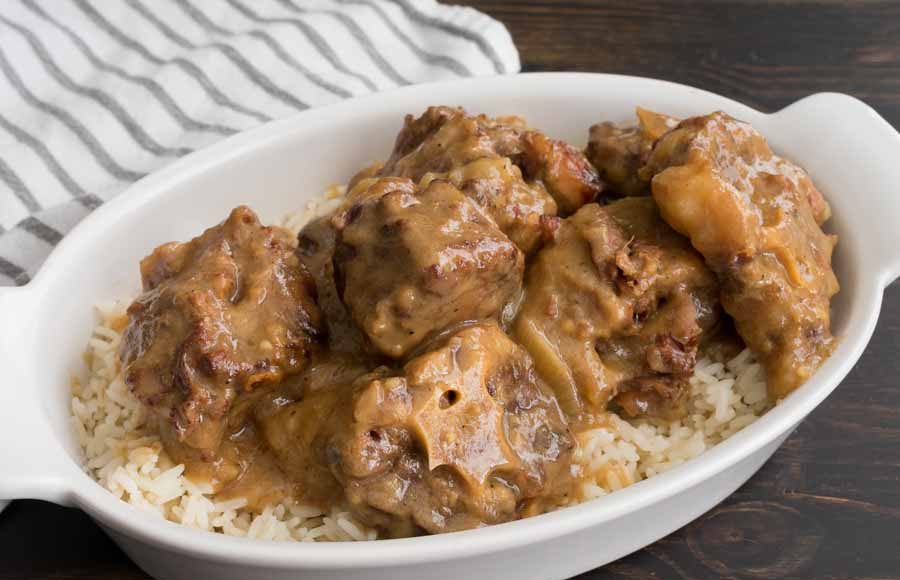 It’s been cold, and I’m craving comfort food. Amazing how that happens! Southern food is my go-to comfort food category since it was one of the cuisines I grew up on. You would think that made my recipe search easier, but you would be wrong. Searching “Southern” in my Pinterest boards pops up a lot of delicious-looking recipes, making the choice a tough one. But after hours of searching (kidding!), I settled on these Southern Smothered Oxtails. I’ve never had them this way, so it will be a somewhat new experience. But anything that’s covered in gravy has to be good, right? Let’s hope!

These oxtails are slow-cooked until they are fall-off-the-bone tender, then smothered in a homemade onion and garlic gravy. You can’t beat this flavor!

Recipe Author: Rosie at I Heart Recipes
Get the recipe

As you can see, there aren’t a lot of ingredients in this recipe. I’m perfectly fine with that. It’s full of inexpensive basics like flour, vegetable oil, and Worcestershire sauce. Pantry staples that I had on hand. That left me to shop for a few fresh items.

I recently read that oxtails have become a popular ingredient in homemade stock and bone broth. That explains why they have gone from an inexpensive cut to $6.99 a pound. On the plus side, they are easier to find, and I’ve noticed meatier cuts.

The photo below shows about a pound of the oxtails in a range of sizes. This is a great example of how oxtails can vary in size. In the past, I’ve even found much smaller pieces than the smallest shown. These bigger pieces are much, much nicer.

I have to say this recipe was easy to make. I’m sure that’s no surprise since there are so few ingredients. There’s was a bit of a trade-off, though, since it had to slow cook for hours. Here’s how my time was spent:

That was exactly what was listed on the recipe, and I was happy about that. Not so happy that I had to get up super early to allow it to cook all day, but I’ll get over it.

Things went according to the instructions at first, but I ended up with really thick gravy. Even after adding all the beef broth it was almost as thick as peanut butter. I hoped the condensation in the crockpot would add moisture, but that didn’t happen fast enough.

The gravy was starting to burn and stick to the sides, so I added an extra cup of water after 3 hours. That got things rolling, and I had a nice gravy by the time the oxtails were done. Not too thin or too thick, and it clung to the oxtails as gravy should.

Load more
Good food doesn't have to be complicated, and this smothered oxtails recipe is proof of that. The meat was fork-tender and literally fell off the bone. Then add a savory onion gravy, and you'll agree that this is Southern comfort food at its best. This recipe was very simple to prepare, but I had trouble with the gravy. It was almost as thick as peanut butter, and I had to add an extra cup of water to the crockpot to keep it from burning. Other than that easily fixed issue, things went very smoothly. I'll be making this recipe again.Southern Smothered Oxtails
Hungry PinnerPin, Cook, Eat, Review