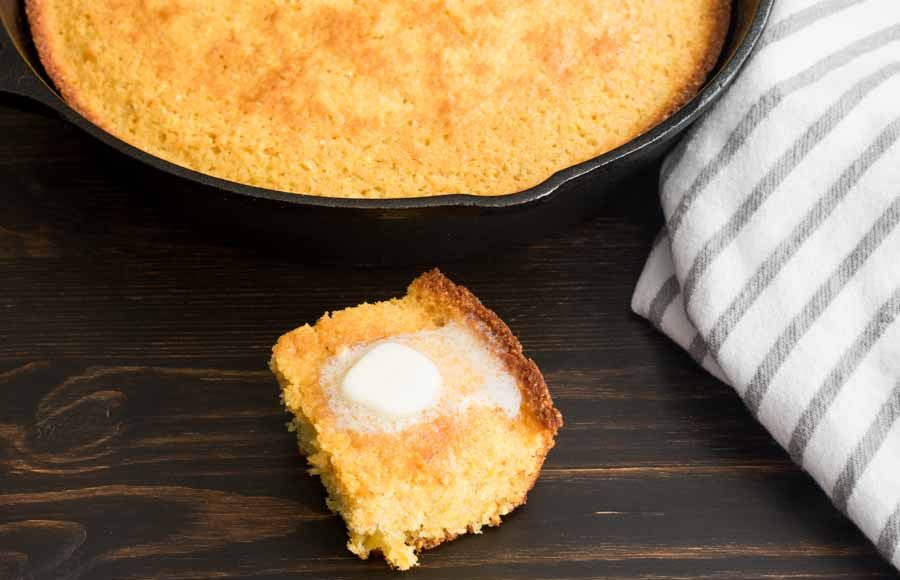 I’m pretty sure that all Southern comfort food must be accompanied by cornbread. It’s an unwritten rule that I’m happy to follow! I’ve made my share of cornbread over the years, and I have to confess that I usually use a box of mix. That little blue and white one that’s sold in every grocery store for about a dollar. I can recall making cornbread from scratch about twice, once with sage and once with bacon. So why am I trying this simple Cast Iron Buttermilk Cornbread? Well, I wanted something that wouldn’t compete with the gravy in the Southern Smothered Oxtails I just made. I also need a good, go-to cornbread recipe, and this seems like it will fit the part. Let’s find out!

All ingredients are mixed in one bowl and then baked in a cast iron skillet. Moist and tender, you won’t find a dry crumb with this cornbread!

Recipe Author: Julie Murkerson at This Gal Cooks
Get the recipe

I had almost everything I needed for this recipe in my refrigerator and pantry. That left me to purchase a few things like eggs, butter, and buttermilk.

I often use the trick of adding lemon juice to milk instead of buying a whole bottle of buttermilk. I can’t drink the stuff (yuck!), so the leftovers go to waste. No more! I found out buttermilk can be frozen. I’m going to freeze the leftovers in ice cube trays and use as needed.

This recipe calls for cornbread (of course!) but doesn’t specify what type. I had a bag of coarsely ground yellow cornmeal leftover from the Braised Chicken Thighs with Mushrooms and Creamy Polenta I made a while back. That would have made very crumbly cornbread, so I mixed it with some finely ground cornmeal—2 parts coarse to 1 part fine. The finished cornbread was a little crumbly, as it should be, but held together nicely.

This buttermilk cornbread was almost as easy as using the boxed mix. Really, most of the work was mixing the ingredients together, if you call that work. Everything went very smoothly, and I had a beautiful skillet of cornbread baked in 38 minutes.

One thing I found unusual but liked was preheating the cast iron skillet in the oven. I’m convinced that gave the cornbread the lovely golden brown edges you see in the photo. It was crisp on the outside but moist on the inside. I found I didn’t need butter or gravy with it.

I do have to recommend doing one thing differently than instructed. When I spread the vegetable oil in the pan, I used a pair of tongs to hold the paper towel. Past experiences have probably made me overly cautious when dealing with hot pans and oil, but better safe than sorry.

Load more
Cast Iron Buttermilk CornbreadThis buttermilk cornbread was a little sweet and had crispy edges that I loved (Thank you, cast iron skillet!). And, believe it or not, it was moist enough to eat plain. Dipping in gravy or spreading on a pat of butter is an option, not a requirement, although I did try both in the interest of integrity... And because it tasted good! The recipe is almost as simple as using cornbread mix, and far, far better tasting. I've found my new go-to cornbread recipe.
Hungry PinnerPin, Cook, Eat, Review