One Pan Shrimp and Pasta in Tomato Cream Sauce 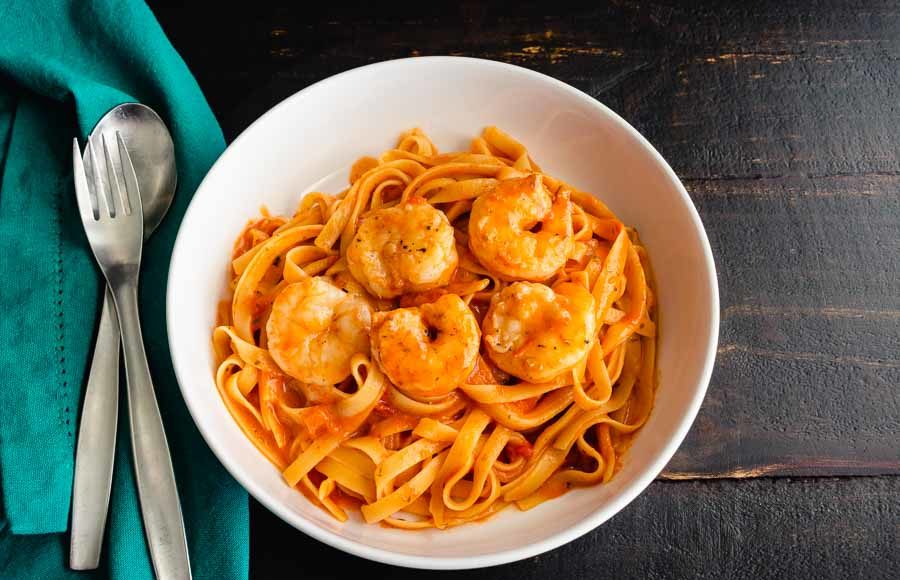 I love to cook, but I hate doing the dishes! That’s why recipes that can be made in one pan appeal to me so much. This One Pan Shrimp and Pasta in Tomato Cream Sauce recipe had a lot of things I like: pasta, seafood, and an Italian feel. I had to give it a try!

This post was originally published on July 3, 2017. The text and photos were updated on July 20, 2021. The review and rating have not been changed.

This One Pan Shrimp and Pasta in Tomato Cream Sauce is not only incredibly easy to make, it comes together in just 30 minutes if your shrimp are already peeled!

Recipe Author: Amy at The Blond Cook
Get the recipe

I have to say I wasn’t looking forward to the prep work on the shrimp. Peeling and deveining an entire pound sounded like it would take a while, but I was willing. I assumed frozen shrimp would be cheaper than fresh. I was wrong.

First, I could only find pre-cooked frozen shrimp that had been peeled and deveined. I wasn’t too into that, so I went by the seafood counter and got a pleasant surprise. Fresh, peeled, and deveined shrimp for about $3 less. Sold!

If there ever was a perfect seasoning, Italian seasoning is it. The stuff is magical! It’s typically a blend of oregano, marjoram, thyme, basil, rosemary, and sage. There’s no guessing which herbs and how much since they have already been blended. I use it every chance I get, like in this White Bean and Ham Soup.

Making this dish was pretty easy, especially with the shrimp already peeled and deveined. Can I say how wonderful it was not to have to pre-boil the pasta and lug a heavy pot full of boiling water to the sink to drain it? It’s the little things…

You do need a large saute pan to accommodate the linguine and be able to stir the sauce without making a mess. Also, be sure to stir it a few times while it’s cooking so it doesn’t stick together. I find this is especially important during the first few minutes.

Load more
This easy to follow recipe made a pan of creamy, tomatoey goodness in 30 minutes. My husband and I loved it! The timing is perfect for cooking the shrimp to be tender, not chewy, and the pasta was perfectly al denté. Unsurprisingly, the tomato is definitely the most prevalent taste. The cream and broth do soften the tomato taste, though, so the shrimp comes through nicely. You can also manage to get a shrimp in most bites, which is nice, and there's plenty of sauce too. All in all a filling dish that will satisfy your carb and seafood cravings all at once!One Pan Shrimp and Pasta in Tomato Cream Sauce
Hungry PinnerPin, Cook, Eat, Review