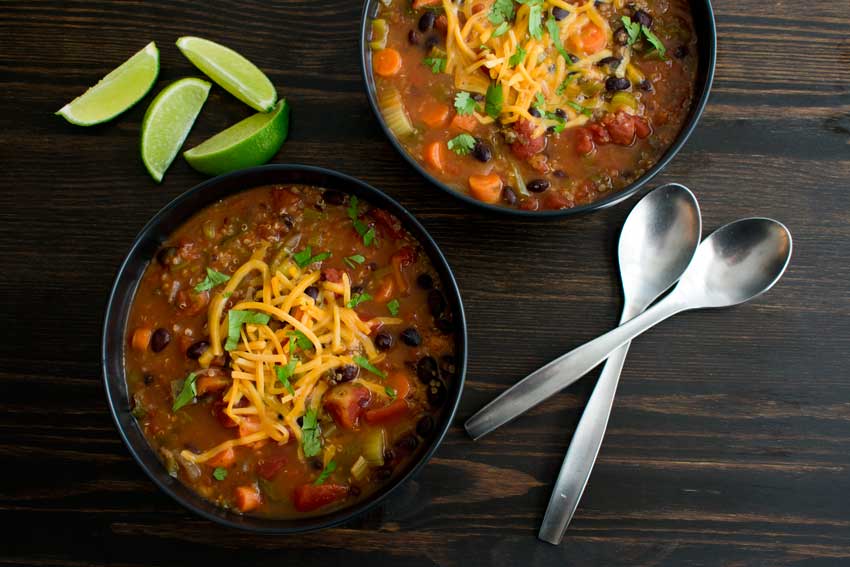 I decided to make this Mexican Quinoa Stew recipe for a few reasons (besides the fact that it sounds delicious). It obviously keeps with this week’s Mexican theme, plus it’s healthy, vegan, and I’ve never tried quinoa. I know, I’m really late to the trendy food party on this one, but I’d like to think I’m making up for that now. The author says I’ll love it, so let’s find out if I do!

Recipe Author: Kate at Cookie and Kate
Get the recipe

The list of ingredients for this quinoa stew is a bit long at 15 items, and that doesn’t include the optional garnishes. I wish I could say a lot of the ingredients were pantry staples, but no such luck. This time I had to buy most of the ingredients to make this recipe. There was some good news though. Most of what I had to buy was canned vegetables and produce, and nothing was expensive or hard to find. My regular grocery store even had the quinoa, though I did have to spend some time scanning the shelf for it.

With all the fresh vegetables you would think this recipe took ages to prep (I sure did). You would be wrong. Here’s how my time was spent:

My prep and cooking times didn’t align exactly with the times on the recipe, but my total time was spot on. I love it when that happens!

I think the reason my prep time was quicker (10 minutes instead of 15) was that I used my vegetable chopper. There was so much chopping needed that the small amount of extra cleanup was worth it.

And I think the reason my cooking time was longer was that I don’t have an immersion blender. Instead, I ladled a little of the soup into my regular blender then returned it to the pot. I’m not sure I was happy with the texture after. The stew was chunkier before I blended some, and I think it looked more appealing.

Load more
This quinoa stew was packed with vegetables and tons of flavor. I’d say the cumin stood out the most, reminiscent of vegan chili. I thought the carrots and celery were a little out of place, but they added a nice crunchy texture to the tomatoes and beans. I really didn’t notice the quinoa, and I’m not sure if that was a good or bad thing. Overall, this stew was tasty, easy, and healthy, but I’m not sure if it’s something I’ll be craving again.Mexican Quinoa Stew
Hungry PinnerPin, Cook, Eat, Review