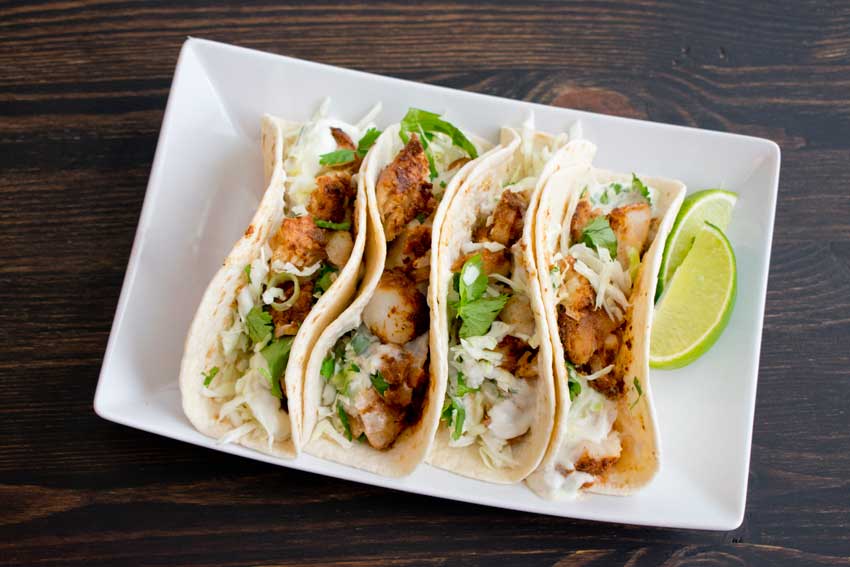 Looking over my posts from the past few weeks, I noticed that something was missing: seafood. And since I have been focusing on Latin American food, this fish taco recipe just seemed like a natural. Now I love tacos, but I rarely make them. Why not? The terrific Mexican/Spanish restaurant that’s less than a mile from my house! It makes takeout too tempting sometimes, but I’m going to change that today. It’s not my first time making tacos, but it is my first time making fish tacos. Let’s find out if they really are as easy as promised.

When lime and cilantro come together with fish, a mouthful of exquisite flavour is born. Try these easy fish tacos with lime crema and see for yourself!

Recipe Author: Sam at Ahead of Thyme
Get the recipe

The list of ingredients for this recipe looks kind of long, but don’t panic! I’d say about half of it is spices I already had in my pantry. That left a few items to shop for, but not too many. I had to buy fresh items like the fish (I chose cod), dairy, and produce, but everything was easy to find at my regular grocery store.

This recipe for fish tacos is divided into three parts: the lime crema, slaw, and tacos. Well, really four if you count preparing the fish separately from assembling the tacos. Fortunately, you can work on the lime crema and slaw while the fish is marinating and cooking. The whole process took me 29 minutes, and here is how I did it.

Although it isn’t the order the instructions were written in, I started with the fish since it has to be marinated first. Mixing up the marinade and dipping the fish in it was as easy as it sounds. This was the perfect time to get the oven preheated too.

While the fish was marinating in the refrigerator, I got to work on the lime crema. I added all the ingredients to my mini-prep and pulsed it a few times to get it mixed thoroughly. Easy peasy!

Between the lime crema and slaw, I popped the fish into the oven. Then I got to work shredding the cabbage with my mandoline. It made very short work of it! A little more slicing and dicing, then I just mixed the rest of the ingredients with my shredded cabbage. From there all I had to do was wait a few minutes for the fish to finish cooking.

Assembling the tacos was as simple as described, and I didn’t have any trouble doing it. Well, it was difficult getting the soft taco shells to stand up for photos, but that’s not something most people will have to deal with LOL!

The only slight confusion I had with this recipe was the quantity. The recipe says it yields four tacos, but it calls for eight soft taco shells (tortillas). I got eight tacos out of this recipe, so maybe it’s four servings of two tacos each?

Load more
Easy Fish Tacos with Lime CremaThese fish tacos are easy, and that lime crema—wow! Not that the fish and slaw weren’t yummy too, but the lime crema makes this dish extraordinary. And by extraordinary I mean they were better than the fish tacos at my favorite Mexican restaurant (and I thought theirs were the best ever). The fish, slaw, and crema were all ready in half an hour, including time to marinate the fish. This recipe makes an excellent quick weeknight meal that tastes like more work than it really is.
Hungry PinnerPin, Cook, Eat, Review