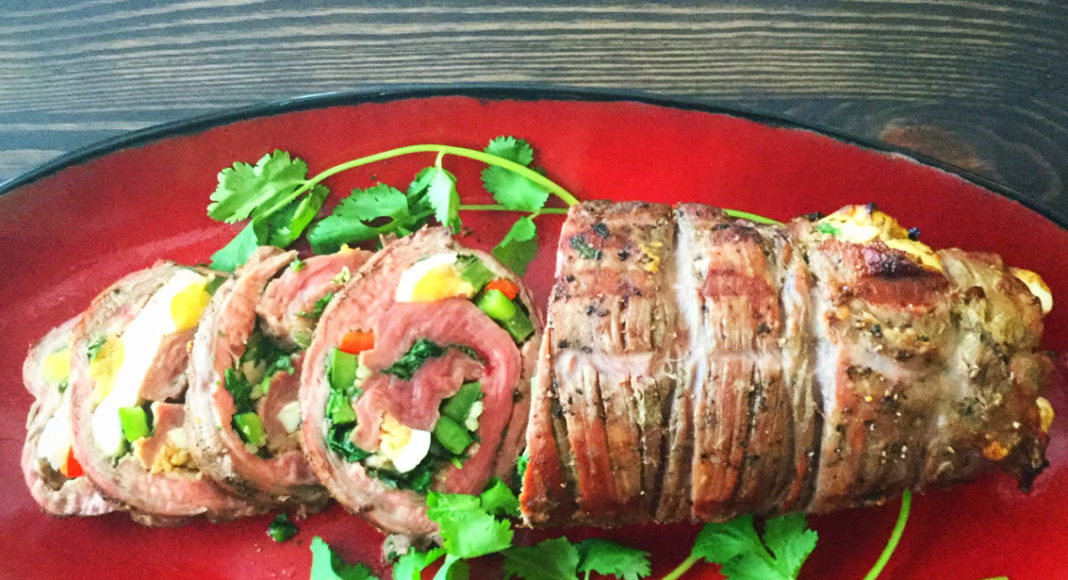 I have been wanting to try this recipe for a while. Just reading it made me hungry: steak, hard-boiled eggs, peppers, cilantro, garlic… But I thought it looked complicated, so I kept putting it off. I could kick myself! It turns out that matambre isn’t as difficult as it looks, and it tastes better!

Matambre: An Argentinian Stuffed flank steak with hard-boiled eggs, bell peppers and a mixture of cilantro, garlic, and olive oil. The matambre is then grilled to perfection and cut into thin slices before enjoying.

Recipe Author: Joanna Cismaru at Jo Cooks
Get the recipe

Most of the ingredients for the matambre were inexpensive and easy to find. Not so much for the steak. A 2-pound piece of flank steak isn’t cheap at just under $18. But it is a lot of meat, and the filling adds to that. I was able to get 6 servings from this dish, so it wasn’t as pricey as I initially thought.

The only piece of special equipment I needed was kitchen string, a.k.a. butcher’s twine. My local grocery store didn’t carry it according to their app, so I had to order some from Amazon. I waited anxiously for it to arrive–I really wanted to get started on my matambre!

I have never butterflied a flank steak, so that was my first challenge. I decided to find a video demo because I had no idea what I was doing. It wasn’t as difficult as I thought it would be thanks to this video. The key is to use short, shallow cuts with a very sharp knife and to take your time. I had my steak butterflied and pounded out in 5 minutes. Not perfectly, mind you. I did cut all the way through in one spot, but I put that end in the middle of the roll and had no problem.

I had a large, thin rectangular piece of meat once that was done. You can see in my photos that I had to double up my cutting boards so it would fit. Now it was time to top with the oil, garlic, and herbs. That was very easy to do using a tablespoon to spread the mixture over the meat. Popping the eggs and peppers on top of that was also easy.

Next comes rolling everything up and tying it for cooking. This is another step I assumed would be difficult but really wasn’t. I lost 1 pepper and 1 piece of egg, but the rolling went pretty smoothly otherwise. Next time I won’t put filling quite so close to the edges.

Using kitchen twine was another fast for me, but I don’t think I did too badly. I used 6 pieces of string in total: 4 around the roll to keep it together, and 2 around the length to help keep the filling from escaping the ends. I ended up with a fully prepped matambre in 20 minutes, just slightly longer than listed.

The cooking times were spot-on. I had my husband grill the matambre for 20 minutes (5 minutes on each side). Then I immediately put it into a 400-degree oven for 10 more minutes followed by a 15-minute rest before removing the kitchen string and slicing.

Load more
Matambre: Argentinean Stuffed Flank SteakThis recipe wasn't nearly as difficult as I imagined, and the effort is soooooo worth it! It took just over an hour from start to serving. The outside was seared and slightly crispy while the inside was a warm pink. The garlic really came through, which I loved, and the peppers, herbs and eggs added a lot of flavor. I enjoyed the matambre hot and, the next day, cold.
Hungry PinnerPin, Cook, Eat, Review