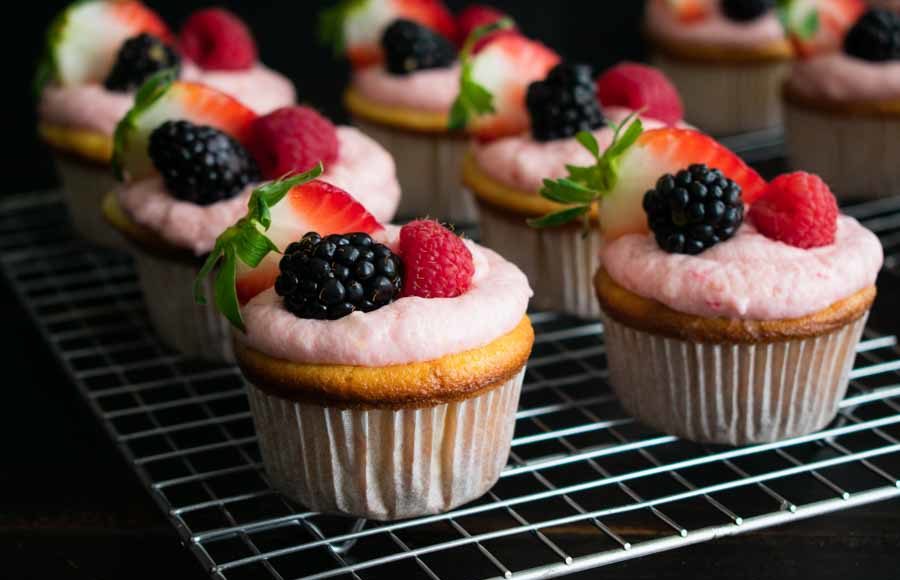 It feels like I just made cupcakes, and here I am making another batch. I guess I’m just in that kind of mood. Then again, when am I not in the mood for a cupcake? Their small size makes them ideal treats when I need a snack or a small dessert. Plus the varieties are endless. the last recipe I made was Moscow Mule Cupcakes, and that was strictly for me and my likes. This time I’m taking my husband’s tastes into account (which just so happen to align with mine ?) and making these Lemon Cupcakes with Lemon Raspberry Buttercream. He’s hinted at lemon with strawberry or raspberry for a while, and now it’s time to give his idea a try.

Deliciously light and fluffy lemon flavored cupcakes that start with a boxed mix, and then are topped with the ultimate in lemon raspberry buttercream, and garnished with fresh berries. This lemon raspberry flavor combo is a winner.

Recipe Author: Rachael at Eazy Peazy Mealz
Get the recipe

This recipe seems like it has so few ingredients, and I’m not mad about it. Not at all! The main reason is it uses pre-packaged cake mix. I has the flour, flavoring, and leavening ingredients already mixed in.

The recipe calls for a 16.25-ounce package of white cake mix. I only found one brand at Whole Foods, and it was a 15.25-ounce box. I thought about adding some extra flour since that’s mostly what cake mix is. In the end, I didn’t and things worked out just fine.

As you can see, the rest of the ingredients were pretty simple. Milk, eggs, butter, etc. The recipe does list cream cheese as an optional ingredient in the buttercream, but I added it. I just happened to have 4 ounces leftover from another recipe. Love it when that happens!

Finally, I needed some fresh raspberries for the buttercream, and I found a pint of them. That gave me more than enough for the frosting and garnishes. Plus I bought a container of blackberries and strawberries.

I have to say that this recipe was pretty easy to follow. Using the cake mix probably cut down on a few steps like it did the ingredients. Anyway, here’s how my time was spent:

I think all cupcakes recipes kick off with making the cupcakes, and this one was no different. And thanks to my stand mixer, making these was pretty quick and easy. It was really just a matter of adding the ingredients to the bowl, mixing them thoroughly, and pouring the batter into the lined muffin tins. Tip: You’ll need two muffin tins since this recipe makes 18 cupcakes.

Once the cupcakes were in the oven, I cleaned up my stand mixer and got started on the buttercream. Like the cupcakes, this was mostly a matter of putting the ingredients into the bowl and mixing them up. Then I put the freshly made buttercream into a piping bag and chilled it in the refrigerator while the cupcakes finished baking and cooled.

About 20 minutes later, I was ready to frost and decorate my cooled cupcakes. the buttercream was still soft, and I thought that would be a good thing. Unfortunately, it began to separate as I was piping it on. Oh no!

I was worried it would essentially melt off the cupcakes before I could garnish them with the berries. It kind of started to on some of the cupcakes, but the berries helped disguise it. I made sure to snap the photos very quickly and get the cupcakes into the refrigerator. My hope was chilling the buttercream would solidify it somewhat, and it did.

We loved the cupcakes, and the frosting was the best part. However, it needed to be thickened up. Fortunately, I found out what to do next time with a quick Google. Tip: Adding some extra powdered sugar will thicken buttercream.

I do wish I had realized it was too thin before I piped it on, but baking is not my area of expertise. But I like to stay positive, so I’m calling this a learning experience.

A Note About the Butter and Eggs

It’s not part of the instructions, but I set my butter, eggs, and cream cheese out a few hours before I planned to cake. That allowed them to soften and come up to room temperature.

Why? It helps them trap air and makes lighter, fluffier baked goods. And don’t worry if you forget—the internet is full of tips and tricks to bring your ingredients up to room temperature faster than that.

Load more
Lemon Cupcakes with Lemon Raspberry ButtercreamThese Lemon Cupcakes with Lemon Raspberry Buttercream are lemony-berry goodness, in cupcake form. The cake was moist and fluffy, but the fresh raspberries and lemon zest in the buttercream were what really makes them incredible. Talk about delicious frosting!! Making this recipe was easy, but I wish I had included some basics like bringing the butter and eggs up to room temperature (it helps make the cake fluffy). Also, the buttercream began to separate while I was piping it on, and some of the cupcakes looked a little melty after just a few minutes. A little more powdered sugar would have fixed it, but it was too late at that point. Fortunately, adding the berry garnish and quickly getting the cupcakes into the refrigerator saved them. Plus the berry garnish added extra summer berry flavor and was just plain gorgeous. Despite the difficulties, I can see myself making this recipe again. It was so good!
Hungry PinnerPin, Cook, Eat, Review