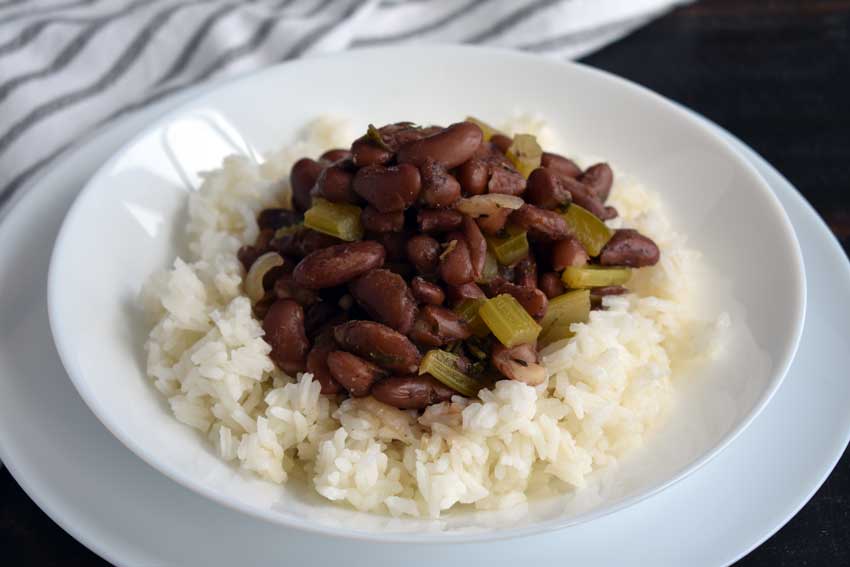 I grew up eating beans and rice in all sorts of combinations. I know now it was partly tradition and partly a good way to stretch our food budget. But beans and rice will always be a comfort food that brings back happy memories of cooking with my mom. And since I started this week with a Cajun shrimp dish, this New Orleans-Style Red Beans and Rice recipe was a natural follow up.

The list of ingredients for this red beans and rice recipe is sort of long, but have no fear! It’s full of inexpensive and easy to find ingredients that any grocery store should stock. This recipe does call for a  specific brand of red kidney beans, but I wasn’t able to find it at my local grocery store. I opted for generic beans instead since other brands didn’t have 1-pound bags.

I looked around Pinterest for a Creole spice recipe and couldn’t find one I liked. From what I’ve read, Creole seasoning is similar to Cajun but not as hot. Everything I found sounded like it would be very hot. Fortunately, I had a can of Tony Chachere's Creole Seasoning in my pantry so I used that. If you’ve never tried it, you need to. It works on everything from meat to vegetables and makes even blah stuff tasty.

This recipe took some time (3 hours 37 minutes to be exact), but it was so worth it! The first thing to do is sort the beans. Spread them out on a clean, dry kitchen towel and remove any that are wrinkled or not whole. Keep an eye out for any stones or dried stems too. They aren’t likely but are always a possibility. Once that’s done, put the sorted beans into a colander and give them a rinse in cold water.

You’re ready to boil them at this point. I used a cast-iron pot that was just over 5 quarts and boiled the beans for an hour and a half. I left the pot uncovered (for more tender beans) and stirred the beans every 15 minutes. There was a lot of evaporation, so I had to add 6 cups of water during that time (1-2 cups at a time as I noticed the liquid evaporating).

While the beans were boiling, I had plenty of time to prep the rest of the ingredients. It took 10 minutes to chop and measure everything and 7 minutes to saute the vegetables. I completely forgot to time browning the ham hock, but it was done in minutes. Since it was oddly shaped, I used a pair of tongs to hold it in place so I could brown all sides. The last part of the recipe was the easiest: just let it boil for 2 hours. This was also uncovered, and I had to add another 6 cups of water during that time (also 1-2 cups at a time).

I made the rice when the beans were close to being done. You’ll need 2 cups of dry rice to make 6 cups of cooked rice. The rule of thumb here is the volume of rice triples when cooked.

The final step was seasoning the beans. The Creole seasoning I used has salt and pepper in it, so I skipped those. I ended up adding 1 tablespoon of Creole seasoning and 2 tablespoons of Tabasco Original Hot Sauce. It sounds like a lot, but there is plenty of liquid to dilute the seasonings.

Load more
Red beans and rice is a Louisiana classic that never gets old. This recipe is full of simple ingredients that combine to make a savory dish that can be eaten as a main or a side. Most of the time spent is simmering on the stove, but you do have to keep an eye on the beans. This is not a quick weeknight recipe, but it's well worth the time needed to make it. And if you like it the first night, you'll love it as leftovers! A night in the refrigerator lets the sauce thicken and enhances the seasonings.New Orleans-Style Red Beans and Rice
Hungry PinnerPin, Cook, Eat, Review