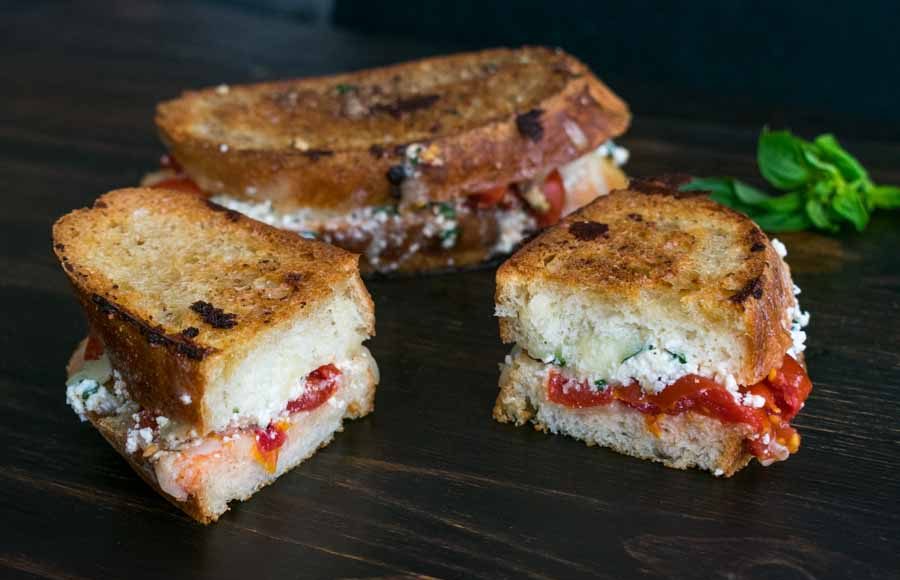 Okay, I have a confession to make: I’m on a little bit of a comfort food bender. But unlike the Cheeseburger Stuffed Shells I made last week, this isn’t a lightened up or healthier version. Nope, this Lasagna Grilled Cheese recipe is a full-on pan-fried grilled cheese sandwich with not one but two types of cheese plus a few extras. Hungry yet? I sure am!

Bright tomato and creamy ricotta are the essence of lasagna. These are critical ingredients. For added flavor we’re adding fresh basil, salt, pepper and butter. Mozzarella cheese work as cheesy glue and as an extra layer of delicious! Let’s sandwich!

Recipe Author: Joy Wilson at Joy the Baker
Get the recipe

I looked high and low for canned cherry tomatoes locally and had absolutely no luck. And everything I read led me to believe that there wasn’t a good substitute. Fortunately, Amazon came to my rescue, although I did have to buy a six-pack for $14.99. Pricey, but I know I’ll use them in this and other recipes.

The other items I needed were all grocery store basics, and I had no trouble finding them. Thankfully none of them were as splurgy as the tomatoes, and I didn’t break my grocery budget too much this week.

One thing to note though is there will be extra ciabatta, ricotta, mozzarella, and tomatoes. You might want to double up on the recipe or find other ways to use up the leftovers. Spoiler alert: I doubled up on the recipe.

These lasagna grilled cheese sandwiches were easy to put together, but I did have to take care until the cheese melted. I had a few tomatoes slip out and a drip or two of ricotta, but nothing close to a disaster. I just tucked things back in and continued cooking. Here is how my time broke down:

The only minor question I had was whether or not to put shredded mozzarella on all four pieces of bread. On one hand, I had plenty of mozzarella; on the other, it could make spreading the ricotta difficult. I ended up adding the shredded mozzarella to all four slices. I don’t believe you can ever have too much!

Something I did notice was that I cut the bread quite thick, and that made the cheese take longer to melt. Putting the lid on the skillet helped things along, but I had better results when I made the second batch with thinner bread.

Also, I used ciabatta bread and it made for fairly small sandwiches. Cutting it on the bias (diagonally) gave me bigger pieces. Two of those each made a nice lunch for my husband and me.

Load more
These lasagna grilled cheese sandwiches were melty cheesy goodness! I do have to admit I didn't think they tasted a whole lot like lasagna because there was no ground beef, but I also didn't miss it. Instead, I loved the crispy grilled bread and layers of mozzarella, ricotta, cherry tomatoes, and basil. Best of all, these satisfying sandwiches were quick and easy, and ready in just 15 minutes. Lasagna Grilled Cheese
Hungry PinnerPin, Cook, Eat, Review