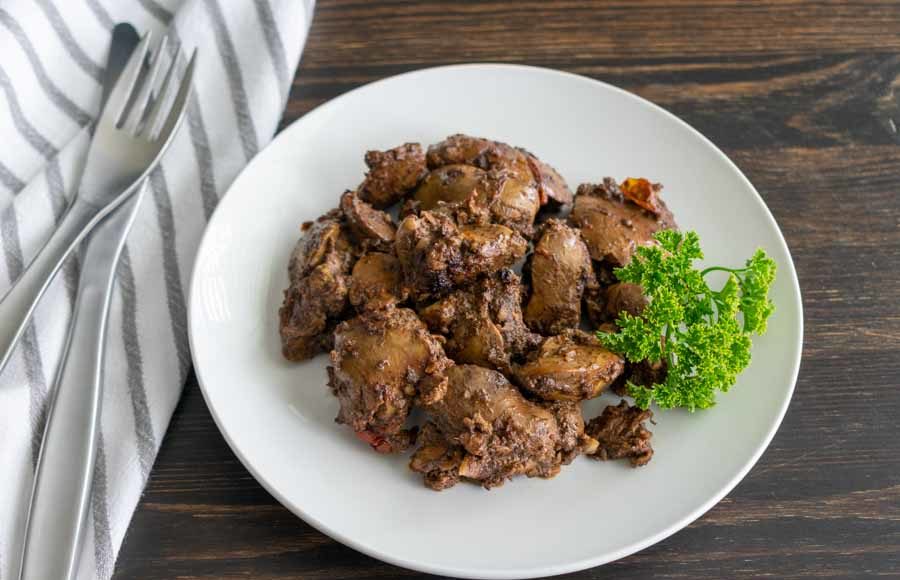 One of my favorite foods ever is chicken livers. And although my mom made them best, I do love trying them in new recipes, and that’s what today is all about with this Fried Chicken Livers recipe. Well, that and my new discovery that chicken livers aren’t as unhealthy as I always thought they were. They are high in cholesterol, but they are also rich in things like iron, protein, folate, and other vitamins and minerals. The conclusion I drew from reading several articles is my previous rule of chicken livers once a year was overly cautions. I can have chicken livers a little more often, and I will.

So, chicken livers must be the cheapest source of protein you can buy that taste’s half good. The problem is a lot of people hate the “livery” taste which is normally because they are cooked to death. Luckily adding a few simple spices to your chicken livers and cooking for ‘just’ the right amount of time will ensure you have a tasty meal (like we have here) or side or starter.

This fried chicken livers recipe is simple, from the list of ingredients to the steps to cooking it. Let’s start with the ingredients. I had most of the ingredients on hand either as leftovers (the chili pepper and garlic) or items I regularly keep in my pantry (the spices, oil, and vinegar). In fact, all I had to buy were the tomato and chicken livers, and you know how I love those super-short grocery lists!

The instructions for this recipe were short and to the point. Basically, do a little chopping, then throw everything into a skillet, cover, cook for 10 minutes, wander off to do the dishes and come back to finish up. I did give everything a little stir after it was all in the pan. I couldn’t’ help myself.

There was a moment of hesitation when I saw the chili pepper didn’t have to be chopped or sliced. It seemed odd to me, and I didn’t think it would add any flavor without being cut, but when in Rome, as they say.

After the 10 minutes was up, I raised the heat to high and stir-fried the livers for 5 minutes. The tomatoes had almost disintegrated by the time I started this step, and they were completely unrecognizable after. I was a little concerned about that, but I kept going—the smell was too good not to!

One note on the chicken over prep work. It wasn’t specified in the instructions, but I separated the livers into halves before adding them to the pan. It’s just a preference I have—I hate having to separate them after they are cooked.

The entire process was very quick and easy. It took me 5 minutes to prep everything and 19 minutes to cook, for a total of 24 minutes.

Load more
I loved these chicken livers! The mix of spices was perfect, adding flavor without overpowering the rest. Although the tomatoes disintegrated during cooking, I was able to taste them, and they did create a coating/sauce on the chicken livers. This simple dish has only a few ingredients, minimal prep work, and cooks up fast. I had mine plated and ready to eat in less than half an hour. The instructions were straight to the point and easy to follow. I did have a moment of hesitation when I noticed the chili pepper was tossed in whole, but I went with it. I'm not sure it added any flavor and it definitely didn't add any heat but I'm not mad at it. No chopping meant less work, and today I was all about less work. In short, if you like chicken livers, this recipe is worth trying!Fried Chicken Livers
Hungry PinnerPin, Cook, Eat, Review