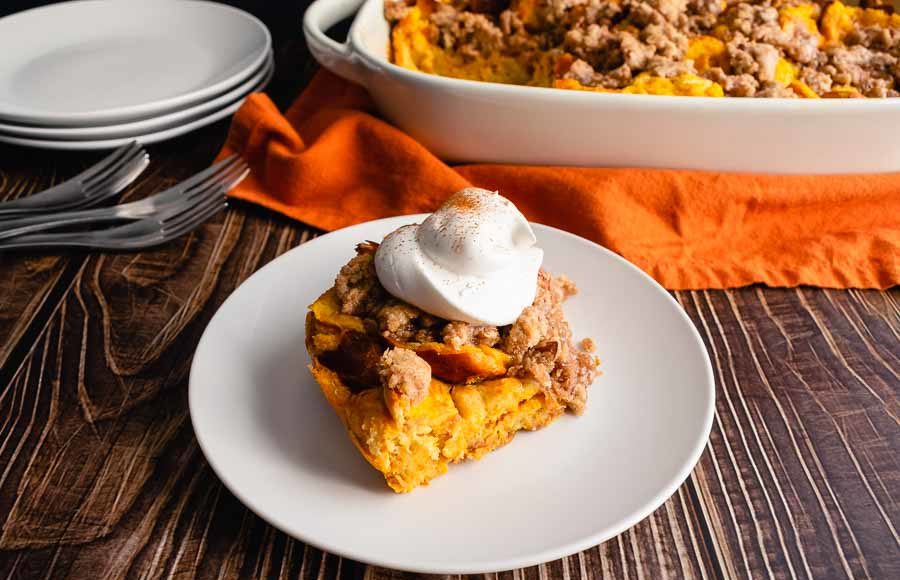 Normally I’m looking for something light and healthy after the Holiday season, but I decided to change things up this year. It’s the first day of winter, and I’m in the mood for a hearty breakfast. That Pecan Pie Baked Oatmeal I made a while back has really gotten me into breakfast, so I’m going to continue the trend with this Pumpkin French Toast Casserole. I know, it’s a little late in the season for pumpkin, but I just had to!

Pumpkin French Toast Casserole can easily be prepped the night before and baked the next morning. It feeds a crowd, has a delicious pumpkin flavor, and a cinnamon streusel topping for a little crunch.

Recipe Author: Fiona Dowling at Just So Tasty
Get the recipe

I normally have most of the Pumpkin French Toast Casserole ingredients on hand, but I had to top up after all that Christmas cooking and baking. That meant shopping for milk, butter, eggs, pumpkin puree, chopped pecans, and bread.

I chose a loaf of challah from the grocery store’s bakery. Buttery brioche would have been good too, but I went with the first option listed. I had everything else needed in my pantry.

The challah needs to be stale for this Pumpkin French Toast Casserole recipe, so I left the loaf on the counter (out of the bag) for about 24 hours. The outside was pretty hard, but the inside was still a little soft. I was worried it would get too mushy, but everything worked out fine.

When I was ready to get cooking, I started things off by preheating the oven. (I love that there is an option to make this recipe a day ahead!) Then I sprayed a baking dish with oil and tore the bread into small pieces.

Next, I wanted to make sure the casserole ingredients blended thoroughly, so I changed up the steps. I broke the eggs into a mixing bowl and beat them lightly before adding everything else. Once blended I poured the pumpkin mixture over the torn bread and gave it a stir. I almost skipped this step, but I’m glad I didn’t because there were lots of dry spots in the bread (I was very surprised at that).

The streusel topping mixed up just as the instructions said. I used my fingers to crumble it over the casserole. Then I covered the pan with foil and popped it into the oven for 40 minutes. I removed the foil when the time was up and baked the casserole for another 15 minutes. It passed the toothpick test, so all that was left was to top it with some whipped cream and cinnamon and give it a try.

Load more
This Pumpkin French Toast Casserole was eyes rolling into the back of your head delicious! As if the pumpkin bread base wasn't enough, it also has a brown sugar-pecan streusel topping. The instructions were easy to follow, and I loved that there is a make-ahead option. I made a minor tweak to how the casserole was mixed, but otherwise, the instructions were perfect. This recipe is so good that seconds are practically mandatory, and I know I will be making it again!Pumpkin French Toast Casserole
Hungry PinnerPin, Cook, Eat, Review