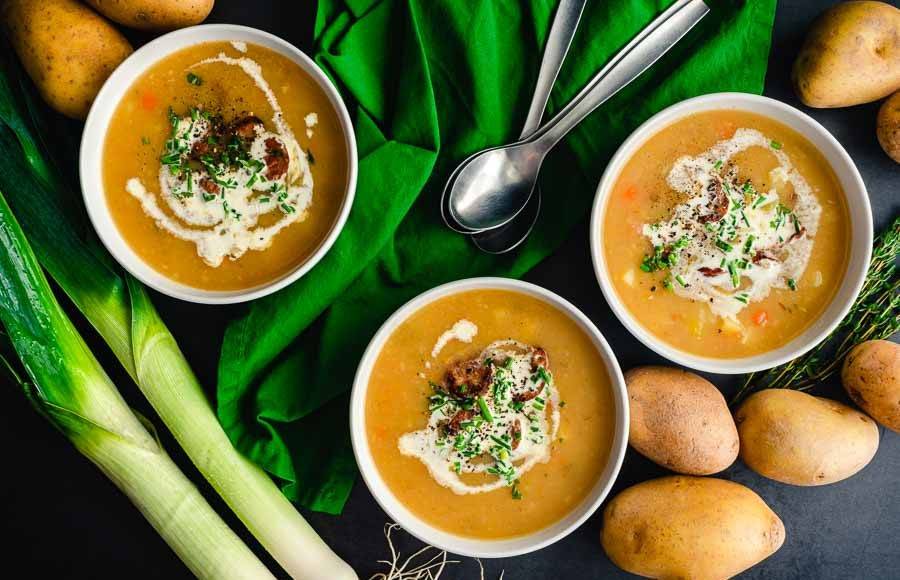 It’s been a while since I have made anything with leeks, and I had a craving. Okay, a mild craving, but a craving nonetheless. Leeks are leafy green vegetables that look like giant scallions. Like scallions, they are related to the onion. The key difference is that leeks have a very mild onion flavor. Another is the leaves are very thick and tough, so you will only want to use the white part of the stalk. Leeks are often used in soups, and that’s exactly what I’m going to do today with this Easy Potato Leek Soup. It looks a little heartier than the traditional potato leek soup thanks to the (optional) addition of Andouille sausage. I’m all for that since a little protein tends to make vegetable dishes more satisfying. Please join me!

Recipe Author: Florentina at Ciao Florentina
Get the recipe

I had the spices for my Easy Potato Leek Soup, but that was about it. My shopping list included pretty much everything, and I was able to find almost everything without any trouble. Tip: you’ll need olive oil for this recipe. It’s not on the list of ingredients, but I always keep it around. Just thought I’d warn you in case you don’t 🙂

Leeks are available year-round in my area even though they are a spring vegetable. Their season is late winter through early summer, so finding them now shouldn’t be a problem. Just be sure to clean them well as sand tends to work its way down into the layers.

The potatoes, vegetable broth, cream, and other fresh items were easy to locate, but the chicken Andouille sausage was another story. I searched high and low in the meat department with no luck. I finally found pork Andouille in the dairy section, so I went with that.

By the way, this is one of those recipes that’s guaranteed to have extra ingredients. I had leftover leeks, carrots, thyme, chives, cream, and Andouille. In fact, I had enough to make this recipe twice, which is exactly what I did a week later! The chives didn’t quite make it, but I didn’t miss them the second time because they’re really just for garnish.

I kicked off this recipe by slicing and cleaning the leeks (in that order). Sand and dirt tend to work themselves pretty far down in between the leaves, and the only way to get it out is after slicing. It sounds strange to clean your veg after slicing, I know, but leeks need it! There’s more on how I do it with a photo in my Slow-Cooker Shrimp & Crab Bisque recipe review.

I had been preheating some olive oil in my 5.5-quart Dutch oven at the same time, so I added the leeks to it. Since the heat was fairly low, I gave them the occasional stir while I finished the prep work instead of continually stirring like I would for a traditional high-heat saute. I had 15 minutes to do that, so I brought out my vegetable chopper to speed things up.

Tip: It’s not stated in the recipe, but I peeled the potatoes because this soup will eventually be pureed. I like my soup a little chunky, but potato peel chunks didn’t sound appealing (see what I did there!).

Everything was ready in time for the next step, and I simmered the potatoes, carrots, thyme, bay leaf, and vegetable stock with the sauteed leeks. At the same time, I grabbed my 10-inch cast-iron skillet and seared the slices of Andouille.

After removing the herbs, my stick blender allowed me to blend the soup right in the pot. Tip: Even after what I thought was a thorough blending, my soup was still a little chunky. Not a problem for me, but something to be aware of if you want a completely smooth soup. In that case, transferring a little at a time to a full-sized blender might be a better option for you.

After that, I was ready to serve my soup. I had fun with all the garnishes for the photos! Tip: Just be sure to layer them in the order listed: liquid, larger solids to smallest solids (that works best for most things with lots of garnishes). And something else to note: I didn’t reserve any leeks for garnish the first time I made this soup, but I did the second time. I highly recommend it! They add a subtly sweet oniony flavor that I loved.

This recipe lists a total time of 40 minutes, and I came close to that:

Load more
This Easy Potato Leek Soup was exactly that, and I truly appreciate an easy recipe! The soup itself was creamy and well-spiced, but I think my favorite touch was the spicy Andouille sausage. It added some extra oomph in the taste and texture departments plus the protein helped make it more filling. Like most soups, this one was even better the next day (how do soups do that?!). Mine took a bit longer than the time listed, but I still had it ready in less than an hour. There were a few minor things missing like the need for olive oil and whether or not to peel the potatoes. Luckily I always have olive oil, and the decision to peel the potatoes seemed right. Overall, this recipe is a keeper! Easy Potato Leek Soup
Hungry PinnerPin, Cook, Eat, Review