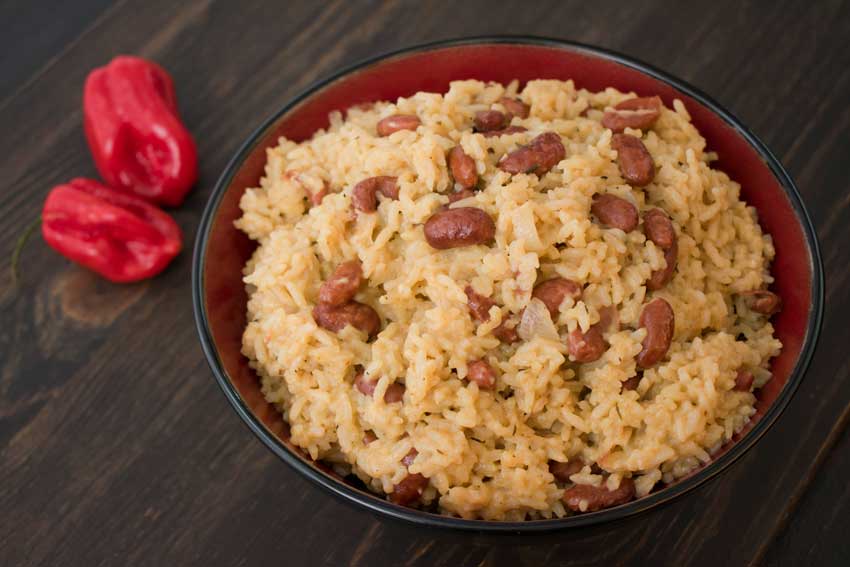 My week of Caribbean food continues with a new version (for me) on a food I will always adore: Rice and beans. I’ve had versions from various regions of the Caribbean and Southern U.S., but I don’t think I’ve ever tried it with coconut milk. Of course, it’s possible I have and didn’t know it, but I highly doubt it. Reading this Caribbean Rice and Beans recipe was a Doh! moment because coconut makes everything better in my book, so why not beans and rice? You know I had to give this one a try!

Recipe Author: Imma at African Bites
Get the recipe

The list of ingredients for this Caribbean rice and beans recipe wasn’t too long, and I had several items on hand. There were a few choices to be made, and here’s what I decided:

I had to buy a few items (onion, coconut milk, kidney beans, chicken broth, and the scotch bonnet pepper), but they were all easy to find and inexpensive staple items.

I have to say this recipe was pretty easy to make. It took exactly 35 minutes, just as listed on the recipe. The directions were easy to follow, but there were a couple of things that almost tripped me up.

First, the recipe gives you the option of using water or chicken broth as the liquid. Step 2 specifies water, so be aware of that if you are using broth. I added 1 cup of water before I realized that and then used chicken broth for the remaining 2 cups.

Other than that, things went very smoothly. I did watch and stir my Caribbean rice and beans throughout cooking instead of just setting it on simmer and waiting for the timer to go off. I suppose that makes it more work than regular rice, but it was worth it and then some.

Load more
Caribbean Rice and BeansOMG, this rice, this rice! Caribbean Rice and Beans is my new all-time favorite recipe for rice and beans. This recipe has a creamy coconut milk-based sauce and really packs a ton of flavor. Adding a whole scotch bonnet pepper gives it a spicy kick, but I didn't find it overpowering. And you can always amp up the spice by cutting the pepper or reduce it by removing it early of omitting it altogether. You also have the option to reduce the amount of liquid you add for a drier, more traditional rice consistency. I love recipes with options!
Hungry PinnerPin, Cook, Eat, Review