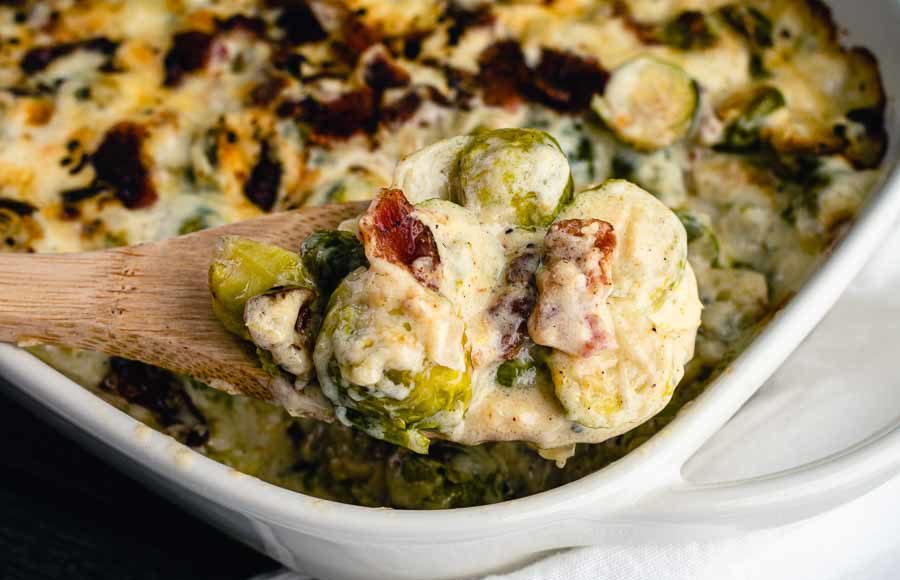 Since I decided to make a turkey breast again, I thought why not make Brussels sprouts again too? In fact, this year’s Christmas menu is just an alternate version of my Thanksgiving menu including some of the same recipes. That might sound boring, but the challenge was to make them different enough. I think I succeeded, especially with this Brussels Sprouts Gratin recipe. Adding tons of cream, cheese, and bacon makes everything better, and I’m pretty sure that’s the case with Brussels sprouts. Still, the only way to prove my theory is to try it, so let’s give it a whirl!

Brussels Sprouts Gratin with bacon…roasted brussels sprouts are paired with a rich cheesy cream sauce, perfect for any holiday occasion!

Recipe Author: Michelle Nahom at A Dish of Daily Life
Get the recipe

A quick pantry check showed I had extra virgin olive oil, salt, pepper, flour, and cayenne on hand. I had to shop for everything else, but I found it all at my regular grocery store.

Brussels sprouts were sold in 1-pound bags, so I used them all. I figured they would come closer to 1.5 pounds after they were peeled and trimmed. Everything else was easy to find including shredded gruyere and sharp cheddar cheese. The slightly extra cost was worth the convenience when cooking such a big meal.

The only item I was unsure of was the light cream. A quick search on my phone as I shopped made me think half-and-half didn’t have enough fat. I ended up going with regular whipping cream since there was nothing labeled “light cream” in the dairy case. It worked a treat!

This recipe has a few phases that make it more manageable:

Most of the work is done during the initial prep phase since that’s when the Brussels sprouts are peeled, trimmed, and halved. That part alone took me 28 minutes (I blame the multitude of tiny sprouts), so you might want to pull up a barstool or do this sitting at a table.

I fried and drained the bacon while I worked on the spouts, and it was cooled and ready to be crumbled by the time I was ready to use it. Once I had the Brussels sprouts prepped all that needed to be done was to toss them with olive oil, salt, and pepper. From there it was into a rectangular baking dish and into the oven to roast for 20 minutes.

I finished the prep work and made the cheese sauce while the Brussels sprouts were roasting. Tip: Both kinds of cheese needed to be reserved for topping. I mixed them together and scooped out 1/2 cup as part of the prep work.

The instructions were very clear and it seemed easier than I imagined it would be. It was mostly stirring and whisking the ingredients in a saucepan. I had a creamy, cheese sauce when I was done.

All that was left to do was spoon the sauce over the roasted sprouts, top with reserved bacon and cheese, and let everything finish baking. The result smelled great, but it wasn’t too impressive looking in the pan If I’m being honest. But don’t let that fool you—this recipe tasted incredibly good!

Here’s how my time was spent from start to finish:

This recipe lists a total time of 1 hour, but mine took quite a bit longer. I’m sure a big part of the slowdown was the Brussels sprouts prep work. The ones I bought were all very small, so there were lots and lots of them to peel, trim, and halve. Tip: Look for larger Brussels sprouts to cut down on prep time.

Load more
This Brussels Sprouts Gratin With Bacon recipe was pure, savory goodness in a hearty cheese sauce. With bacon! I'm pretty new to making Brussels sprouts, but this recipe was easy enough to follow. The only downside was the prep work took a lot longer than stated. I have a feeling it was because there were so many tiny sprouts in the bags I bought. Next time I'll look for larger Brussels sprouts to speed things up. Otherwise, everyone loved this decadent recipe, and it is one I'm sure I will get requests for in the future.Brussels Sprouts Gratin
Hungry PinnerPin, Cook, Eat, Review