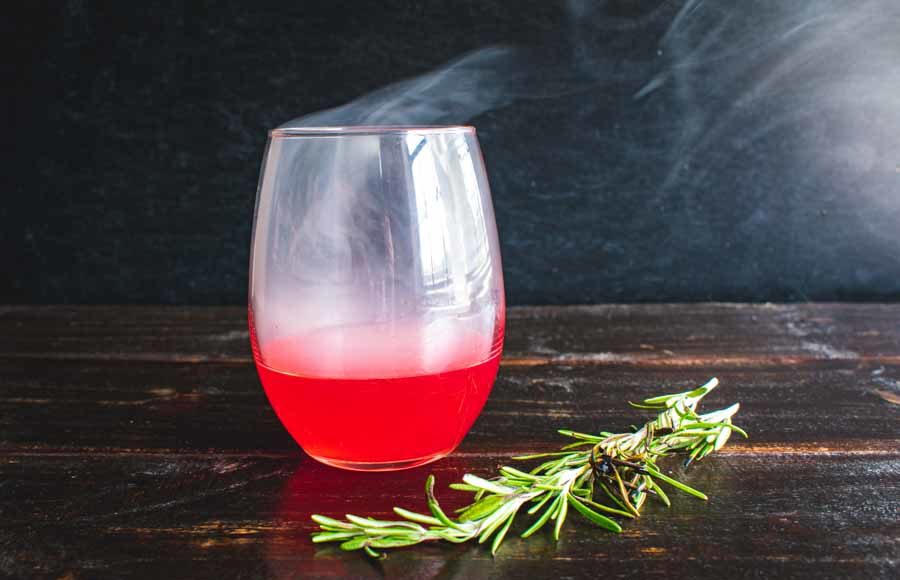 This week started off so nicely with Seattle-Style Smoked Salmon Chowder, and I thought I would continue the smokey theme with a cocktail. Unfortunately, it’s not easy to find a smoked cocktail recipe that doesn’t require a cocktail smoker. Yes, they look like they would be fun to play with, but this is something I just wouldn’t use enough to justify buying one. My cabinet space is already nonexistent! Just when I thought my quest was impossible, I found The Royal Affliction. It’s a smoked scotch-based cocktail that only requires a tea light. I can handle that.

Woodsy, rosemary tinged smoke fills the glass. Those notes infuse through the lightly sweetened berry flavor with tart background highlights. The Black Grouse is mellowed out and given an almost honey quality, while also heightening the smoky flavor. Even when you no longer can see the smoke, it stays with the drink from first to last sip.

Since I didn’t have to invest in a cocktail smoker, I was okay with being a little splurgy on a bottle of scotch for this recipe. And I couldn’t find it! Well, the Black Grouse brand called for in the recipe. I had a bottle of Chivas Regal, though, so I went with that.

I had equally bad luck with Scrappy’s Celery Bitters. Once again, I went with what I had on hand. But that’s where the bad news ends. I was able to find the blackberries, sugar, and rosemary with no problem. I know, it’s not much, but I’ll take it!

Everything went according to the instructions, but I wasn’t sure what the author meant by “cleaned sprigs of rosemary”. I was thinking the leaves should be stripped off so I would be charring only the main stem. However, the photos with this recipe show rosemary sprigs with leaves, so I left them on. Leaves on made more sense to me (so they would flavor the smoke).

Prep, cooking, and total times aren’t listed with this recipe, but my time estimate wasn’t too far off. Here’s how my time was spent:

One last note on charring the rosemary. Since the tea light needs to be placed in a container (I used a rocks glass), you’ll probably need a long torch-style lighter to reach the wick.

Load more
Smoke from charring sprigs of fresh rosemary imparts a unique look and scent to this cocktail, but I can't say I noticed any flavor from it. Instead, the lime and blackberry were at the forefront, creating a fruity and very tart, almost sour, taste. The scotch was completely lost, which disappointed me. That may be because I couldn't find the brand recommended in the recipe--I'm really not sure. Overall, the drink was okay, but I don't think I would make it again.The Royal Affliction
Hungry PinnerPin, Cook, Eat, Review