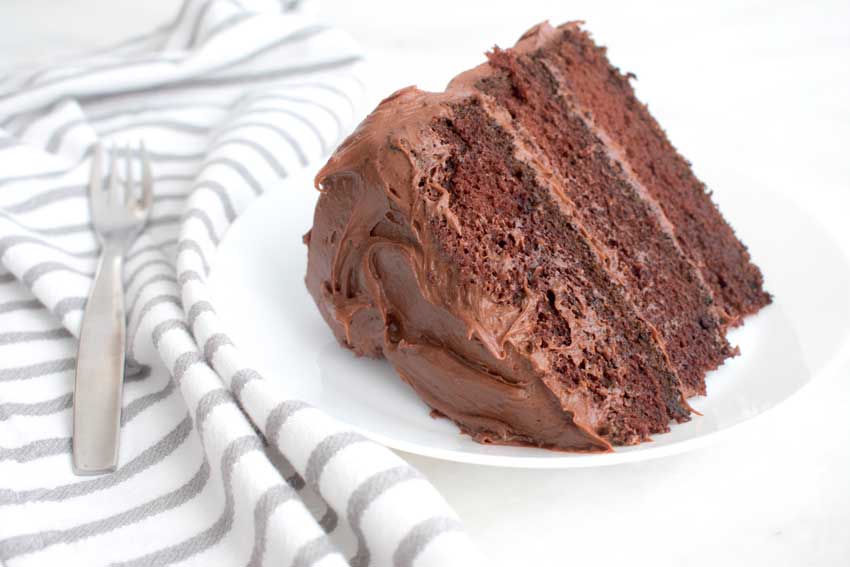 I was having a rare craving for something sweet when I stumbled upon this Red Wine Chocolate Cake with Dark Chocolate Cream Cheese Frosting recipe. I knew I would have to make it by the time I read the word ‘cake‘ in the title. The dark chocolate cream cheese frosting part was like hitting the lottery. I like chocolate, but I love dark chocolate. And now I need to know if red wine in a chocolate cake is good, so I cleared my schedule and ordered a set of cake pans. Red wine chocolate cake, here I come!

Recipe Author: Angelina at Baked Ambrosia
Get the recipe

The ingredients for this cake weren’t unusual, and I was able to find everything I needed at my local grocery store. I tried to find the 7 Moons red wine the author used in her recipe but no luck. Instead, I found a comparable California red blend called Apothic Dark. The description on the label made it sound like it would pair well with chocolate, and some of my husband’s wine-loving friends really like this brand. It was better than I hoped!

And one nice thing about this recipe I need to mention is that it uses cocoa powder instead of shaved chocolate. It’s so much easier to measure out the cocoa powder rather than shaving and melting the chocolate! Just be sure you have plenty of cocoa powder on hand because this recipe calls for 1 1/2 cups.

My red wine chocolate cake took a bit longer than the 45 minutes listed on the recipe. Here is how the time broke down for me:

First up was making the cakes. One of the first steps was creaming the butter, oil, and sugar for 10 minutes. The recipe says to use an electric mixer which could be a hand or stand mixer. I chose a stand mixer as it sounded like the more convenient option.

I changed up the order of the steps since the stand mixer gave me some free time. A few quick checks and some bowl scraping was all I needed to do to the butter mixture. I sifted the flour and greased the cake pans while the butter mixture was creaming.

Once the batter was mixed up I poured it into the cake pans and popped them into the oven for 35 minutes. I washed out my stand mixer’s bowl and got everything ready to make the frosting.

I had some trouble mixing the frosting, and I think it was because I added all the ingredients to the mixer bowl at once. My mixer struggled because the frosting was so thick, and I had to remove about half of it, mix that, and add the rest. Adding the dry ingredients a little at a time would probably prevent that.

Once the cakes were cooled it was time to assemble everything. I did have to level them since the centers rose to a small dome shape. The outer edges were level, so I ran a serrated bread knife along them to level out the center. It was very quick and easy to do.

Next, I added a layer to my cake stand and started frosting. This recipe made more than enough frosting, so I spread it very generously over the layers. In fact, I had a little frosting left over when I was finished.

Load more
Red Wine Chocolate Cake with Dark Chocolate Cream Cheese FrostingI really wasn’t sure if I would love or hate this red wine chocolate cake. Chocolate cake is already delicious, but adding red wine to cake is a pretty radical idea for me. I loved it!! When I took a bite of this lovely cake, the first thing I noticed was the sweet, chocolate cream cheese frosting. All I can say is wow! The chocolate cake eventually comes through, along with a hint of red wine. It was a spectacular combo! I still preferred an old-fashioned glass of milk instead of red wine to go with my cake, but red wine *in* the cake is now a must.
Hungry PinnerPin, Cook, Eat, Review