This week I had a craving for pork, and I chose this Pork Chops with Peppercorn Sauce recipe. I thought the blog it came from sounded familiar, and sure enough, I had blogged a review of one of her recipes in August 2017. It was Pork Loin with Wine and Herb Gravy, and it was just scrumptious. Even my husband loved it, and he is not big on pork. So after that incredible pork recipe from the same blogger, I had high hopes for these pork chops. I was not disappointed. Is there such a thing as a pork whisperer? Because I think I’ve found her.

This easy pork chop recipe is one of my favourites. The Peppercorn Sauce is plate-licking good and it’s perfect with the chops. It’s also very tweakable, by switching up the wine (or omitting it altogether) and adding as much pepper as you’re comfortable with.

Recipe Author: Jennifer at Seasons and Suppers
Get the recipe

There aren’t a ton of ingredients for this recipe, and I had all but three on hand. That left me to shop for the heavy cream, fresh thyme, and pork chops. The first two were easy to find and not all that exciting. The pork chops, however, were.

I found the thickest, loveliest center cut rib chops I’ve ever laid eyes on. They were easily an inch thick and maybe a touch more. Don’t believe me? They weren’t very big, but they were so thick that they were about a pound each. 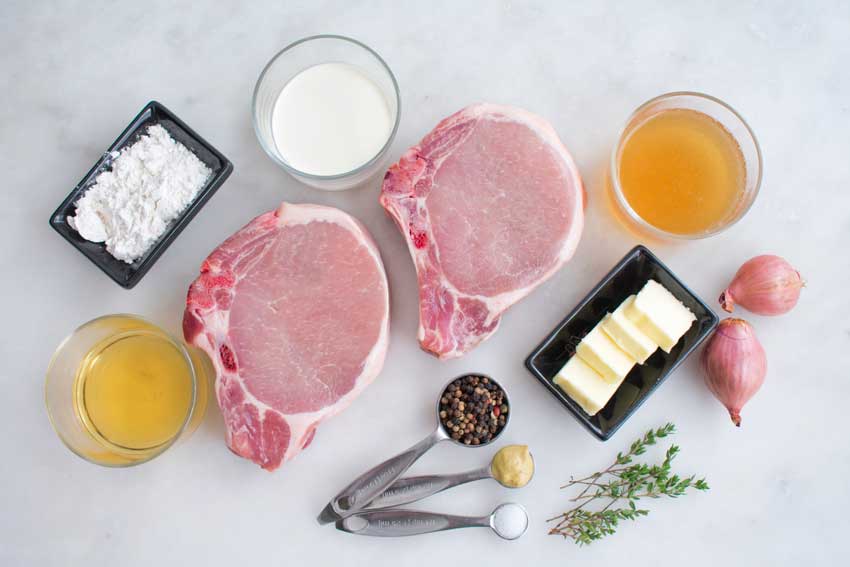 Not surprisingly, this recipe is done in 2 parts: the pork chops and the sauce. Unfortunately, they can’t be prepared at the same time. This is a one-pan recipe and the drippings from the pork chops are used in the sauce. Even so, the entire process took just 33 minutes.

Preparing the pork chops was the first part of this recipe. The instructions include things like “sear until lightly golden” (Step 2) and brown on “the stove-top” (Step 3) but there are no guidelines to the times. I was very cautious about both of these as I didn’t want to burn and/or overcook the pork chops.

For Step 2, searing until golden, I preheated a cast-iron pan and fried the chops for 2 minutes per side. That gave them a nice golden color, and I popped the skillet into the oven for 12 minutes to bake. The recipe does say 10-12 minutes, but I went with 12 because the pork chops were so thick.

After baking, Step 3 said to brown the chops. They were golden brown after they came out of the oven, so it didn’t take much to brown them. Just 1 minute 30 seconds per side gave me the beautiful sear shown in the picture below.

Oh, and I completely forgot to brine my pork chops. I read the blog post, thought it sounded like a neat thing to try, and… The instructions on brining didn’t print with the recipe, and it was about a week between reading about brining and actually making the recipe. I totally forgot it in that week, but I still want to try it. Maybe (hopefully) next time.

Now it was time for the sauce. I opted to use 3 tablespoons of mixed peppercorns (red, white, and black) since I like spicy food. The ingredients call for crushed peppercorns, so I figured that grinding them in a pepper or spice grinder wasn’t the way to go here. Instead, I placed them into a ziplock bag and used a meat mallet to literally crush them.

The rest of the process went very smoothly, but I didn’t see any mention of the dijon mustard in the instructions. I chose to add it with the beef broth and thyme sprigs.

Another question I had was how long to simmer the sauce until it reduced. The instructions said “a few minutes”, so I simmered it for 4 minutes.

Finally, I had to mix up the cornstarch and water to thicken the sauce. The recipe says to use a ratio of 2 tablespoons of cornstarch to 1 tablespoon of water. I tried that and ended up with a solid cornstarch concoction. Doubling the water made the mixture more liquid and pourable. Adding about half of that to the sauce thickened it nicely.

Load more
This dish is all about the sauce, but despite the amount of pepper, the sauce isn't overwhelmingly hot. It's more like there is more pepper in it than I would normally use but not to the point that it was the only thing I could taste. The flavors of the fresh thyme, Dijon mustard, and shallots were there too. I used very thick pork rib chops, and they were cooked to perfection. Browning them before and after baking gave them a nice sear that kept the meat moist and juicy. There were a few steps that I wasn't 100% sure of, but I was able to improvise. Overall, this recipe was pretty easy and very quick at a total of 33 minutes.Pork Chops with Peppercorn Sauce
Hungry PinnerPin, Cook, Eat, Review