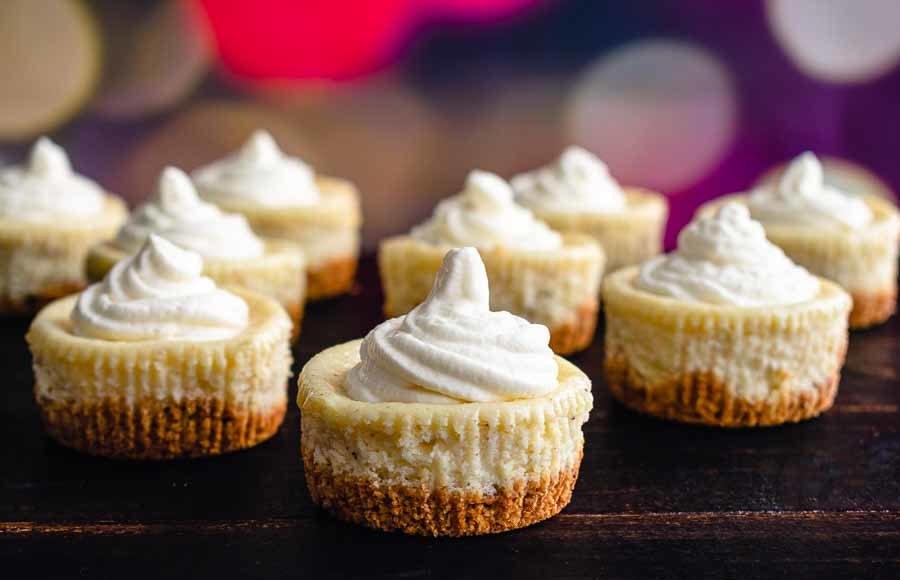 Today is the second post from my 2021 Christmas Menu. After kicking things off with Holiday Gin & Tonic cocktails and Homemade Eggnog, I’m moving to dessert. I know, weird order, but the rest of the dinner will be posted next week. It just worked out that way, but I’m not mad about it. I got to make and photograph a cute and tasty cocktail, sweet eggnog, and these Mini Eggnog Cheesecakes this week. They’re cute, seasonal, and promise to be quick and delicious. Let’s give them a try!

Recipe Author: Melisha at Finding Time To Fly
Get the recipe

Despite this being a cheesecake holiday dessert, these Mini Eggnog Cheesecakes don’t have a lot of ingredients. What’s even better is they’re all basics that should be found in any grocery store around this time of year.

I had the sugar, flour, vanilla extract, and nutmeg in my pantry. That left me to buy Graham crackers, butter, cream cheese, and eggnog. The last one got me curious about making eggnog, and I ended up doing just that—I made this Homemade Eggnog recipe the day before I planned to bake.

According to my 2021 Christmas menu these Mini Eggnog Cheesecakes are made the day before dinner, so that’s exactly how I tested the recipe. I also made this Stabilized Whipped Cream the day before to see how it held together. Here’s how my time was spent:

That’s 10 minutes more than the time listed and does not include time to cool. A little disappointing, but the recipe was as easy as promised.

The prep work started at the bottom with the crust, and this part took me 6 minutes. I placed 5 graham crackers into a ziplock bag, pushed out the extra air, and crushed them with a rolling pin.

After that, I melted the butter in the microwave and mixed it with the crumbs in a mixing bowl. After the mixture came together, I poured about 2 tablespoons per cup and used a measuring glass to gently press it into perfect little crusts.

When I was ready for the filling, I softened the unwrapped packages of cream cheese in the microwave for 15 seconds each. Then I cut one of them in half and put the extra back into the refrigerator.

I used my stand mixer to make the filling, and it pretty much did all the work for me. Then I spooned the filling into the prepared muffin tin and baked for 20 minutes. The Mini Eggnog Cheesecakes need to cool in the pan, so I left it on the counter for a solid hour. Once it was at room temperature, I covered it tightly in aluminum foil and refrigerated the pan overnight.

While the cheesecakes were baking, I spent 6 minutes making the whipped cream. then I loaded it into a piping bag with a star tip. I stored the prepped bag of whipped cream on its side overnight with the mini cheesecakes.

It took all of 5 minutes to top the cheesecakes the next day, and that included a few practice squeezes to make sure they looked good. I don’t think it was as crisp as the day I made it (see my Homemade Eggnog post for that), but it still looked pretty darn good for whipped cream I expected to dissolve.

Oh, and I skipped the extra nutmeg topping because the eggnog and cheesecakes had plenty. I think it would have been okay, but I played it safe.

Load more
These Mini Eggnog Cheesecakes were perfect little Christmas desserts! They were sweet, creamy, eggnog goodness, and rich enough to be satisfying despite their size, making them the ideal for a treat after a big dinner. The best part was these cute little desserts are easy to make and can be made ahead of time. The centers did sink a little, but the whipped cream helped disguise it. They also took me a touch longer than the 30 minutes listed, but I got over it the moment I took my first bite. Cheesecake bliss!Mini Eggnog Cheesecakes
Hungry PinnerPin, Cook, Eat, Review