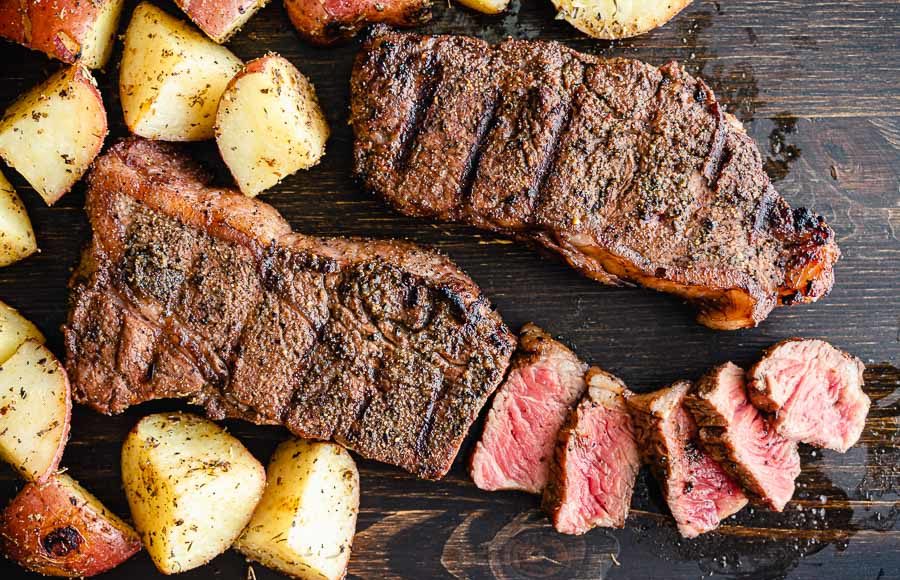 I eat much less meat than I used to, but every once in a while I just need a big, juicy steak. I love red meat! When I found a couple of NY strip steaks on sale, I knew I had to give this Grilled NY Strip Steak with Coffee Rub a try. I have seen coffee rub recipes all over Pinterest, and I have been curious about them for a long time. Coffee and steak. Really? Really. This recipe uses brewed coffee in the marinade and coffee grounds in the spice rub. It doesn’t get much more coffee-er than that. Let’s give it a try!

Grilled New York Strip Steak marinated in a rich coffee and wine base, seasoned with a coffee rub, then grilled.

Recipe Author: Mary Cressler at Vindulge
Get the recipe

As with most recipes, this was a mix of ingredients I had on hand plus a few I had to buy. I had everything but the steaks, so shopping was very easy. I even found 2 NY strips on sale for just under $20. They were bone-in, though, so I did have to debone them.

While I deboned them (it only took a minute or two) I heated some water and made a small batch of coffee in my French press. Once it was brewed, I put it into a small container and refrigerated it until I was ready to make the marinade.

Everything else was just hanging out in my pantry, waiting for this recipe. I wasn’t sure what the SPG rub was, but it turned out to be equal parts of salt, pepper, and granulated garlic. I mixed up a tablespoon of each and ended up with some leftover. It won’t go to waste!

I have to say that this recipe was amazingly easy, and the results were spectacular! Here’s how my time was spent:

The NY strip steaks I bought were bone-in, but the steaks in the photos looked like they were boneless. Bone-in meat takes longer to cook, so I removed them before I made the marinade.

When I was ready to grill, I removed the steaks from the refrigerator, patted them dry, and applied the coffee rub. I let that sit for 20 minutes while the grill preheated.

Grilling the steaks went according to the instructions except mine reached an internal temperature of 125℉ in just 9 minutes. It’s a good thing I had my meat thermometer, or I would have overcooked them.

Load more
I honestly wasn't sure what to expect from this Grilled NY Strip Steak with Coffee Rub, but it was marvelous! I was impressed at how much flavor the marinade imparted in just a couple of hours. Between the steak, marinade, and coffee rub, this recipe was a beautiful balance of savory, sweet, and salty with just a hint of heat. It was also pretty easy to prepare with only two steps in the recipe and very little active time. These NY strip steaks were a hit with me and my husband, and I know I'll be making this recipe again. Grilled NY Strip Steak with Coffee Rub
Hungry PinnerPin, Cook, Eat, Review