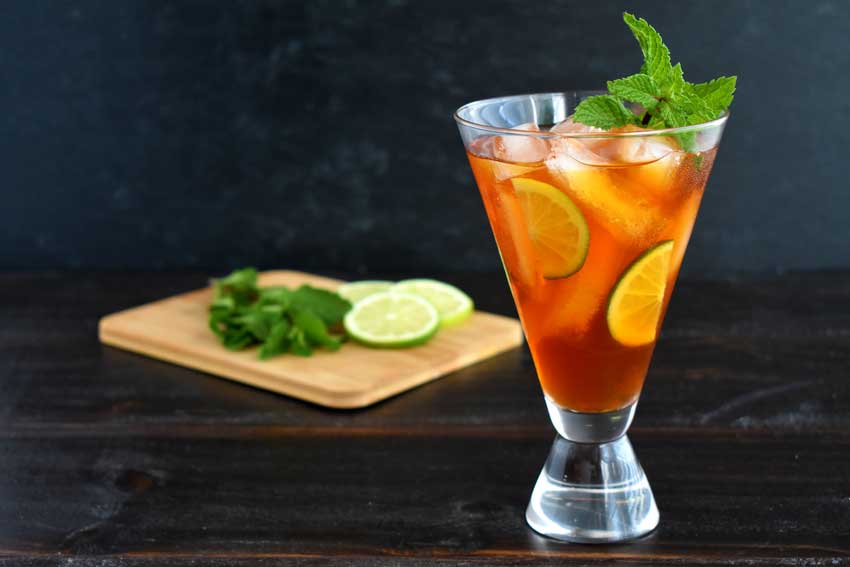 It’s only May, but it’s already hot here in sunny South Florida. Iced tea is the defacto summer drink in my house, but plain iced tea can get boring. I’m always on the lookout for ways to mix it up, and this Ginger and Lemongrass Iced Tea recipe does that in every way. Not only is it infused with ginger and lemongrass, but it also uses rooibos tea, something I’ve never tried. Until now, that is.

Recipe Author: Bintu at Recipes From A Pantry
Get the recipe

I wasn’t worried about the cost or difficulty finding most of the ingredients for this iced tea recipe, except for the lemongrass stalk and the tea. Not that the lemongrass was difficult to find, but I did have to make a special trip to Whole Foods to get it. Actually, I tried Fresh Market first since it’s closer, but they don’t carry it. Grrr. So it was off to Whole Foods and dealing with the crazy traffic around that store to get it. The tea was my biggest worry, but good old Publix had it in stock. No worry was needed.

The author does mention that this recipe can be adjusted to taste. For my first batch, I used a 6-inch stalk of lemongrass, 3 tablespoons of sliced ginger, and 3 tablespoons of honey. My husband thought it was a bit strong, so I halved the ginger and lemongrass for the second batch. It’s a tough call to choose a favorite, but I think I have to go with the first version.

Making this iced tea was simple and straightforward and there wasn’t much extra work involved. The recipe lists the total time at 5 minutes, but the instructions include more details on the times. Here’s how my time broke down:

Looking back, I think the prep work could have been cut down by a minute or two if I had skipped peeling the ginger. It’s strained away anyway, so there really wasn’t a need to peel it. I suppose it’s just a habit for me.

The only thing that confused me was that lime slices are listed in the ingredients but never mentioned in the instructions. I threw them in as a garnish without squeezing them. I think they could be skipped entirely unless you want a garnish. The same goes for the mint, but it is pretty.

Load more
This iced tea recipe was sweet and refreshing, just like any good iced tea should be. The infusion of fresh ginger and lemongrass made it outstanding. I sweetened mine with honey, and I found it was just perfect--not overly sweet or cloying at all. The rooibos (red bush) tea had a more subtle flavor than typical black tea, and it's naturally caffeine free. This recipe is an easy way to change up your iced tea game and well worth trying. And keep in mind the amounts of the ingredients can be adjusted to taste, so you can really personalize it.Ginger and Lemongrass Iced Tea - Sierra Leone Flavors
Hungry PinnerPin, Cook, Eat, Review