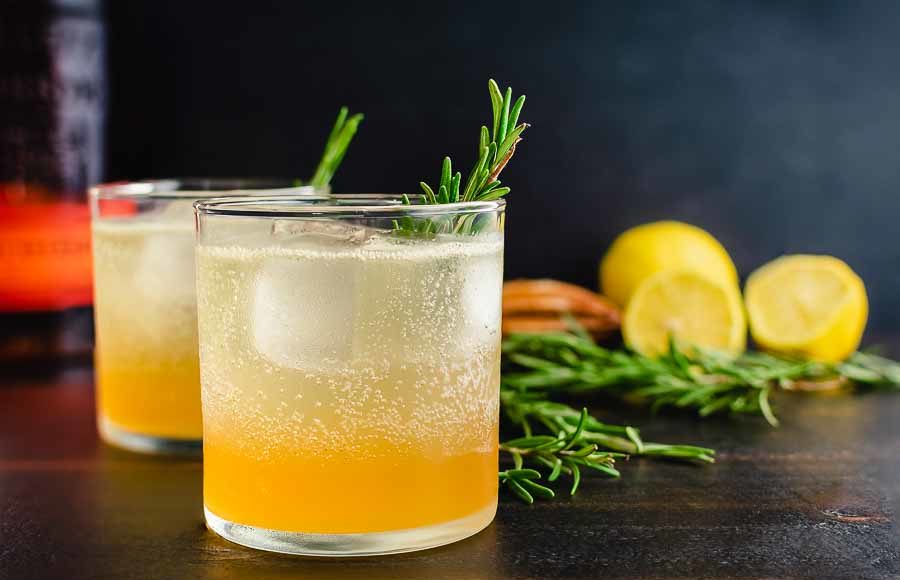 I make most of my lemonade alcohol-free but I slipped in some bourbon last year and tried Kentucky Lemonade. It was sublime. Lemonade, mint, and American whiskey go well together and that recipe made a very sweet, bubbly spiked lemonade. This summer I’m trying out a similar recipe, a Bourbon Rosemary Cocktail. It’s also a sparkling lemonade made with bourbon and fresh herbs. However, it’s made with rosemary and club soda instead of mint and ginger ale. I’m imagining a more mellow flavor that’s not as sweet and more focused on the bourbon and herbs. Let’s find out!

This bourbon rosemary cocktail is the perfect cocktail to enjoy while sitting around a fireplace with family and friends.

Recipe Author: Ali at The Littlest Crumb
Get the recipe

This Bourbon Rosemary Cocktail doesn’t have tons of ingredients, and they were all easy to find. My regular grocery store had the rosemary, lemons, and sparkling water. A quick trip to my local grocery store for the bourbon, and my shopping trip was done. I had the sugar, water, ice, and maple syrup at home.

This cocktail recipe has 2 parts: the simple syrup and the actual cocktail. Most of the “work” is making the Rosemary Simple Syrup, but it’s a very easy recipe that doesn’t take long. Here’s how I spent my time:

The recipe lists a total time of 15 minutes, and my time was almost double that. The simple syrup portion alone calls for simmering for 10 minutes plus 5 minutes to cool. It looks like the author forgot to allow additional time to prep the syrup and make the cocktail.

I always keep plain simple syrup in my refrigerator, so I’m a pro at making it. It’s always at the ready. I also like making infused simple syrup for cocktails, but they force me to plan ahead. Most need to steep overnight to infuse the flavor, but that wasn’t the case with this recipe.

This Rosemary Simple Syrup recipe is ready to use in minutes and makes just enough for this recipe. I consider that a big plus since there’s no chance of extra going to waste. The notes to say to store extra in the refrigerator, so it’s an option if you make more.

The instructions for the simple syrup were easy enough to follow, and I really didn’t have any problems. Just heat the water and sugar in a saucepan, stir, and add the rosemary sprigs. Then let everything simmer for a few minutes, strain, cool, and use in the cocktails.

The only minor problem I had was measuring the rosemary. Getting the fresh sprigs to stay in a measuring cup was challenging, to say the least. I managed to more or less fit 4 sprigs, so that’s what I went with.

I was so pleased that the Rosemary Simple Syrup could be used immediately after I made it! It was the standard process for a shaken cocktail: add ice to a cocktail shaker, add the ingredients, shake well. Then pour over ice, top with sparkling water, and add a sprig of rosemary to garnish.

Okay, that last part was something I did to pretty up the frinks for photos, but it only took a second to do. I suppose I could have put a touch more effort in and added a slice of lemon, but it didn’t occur to me.

The recipe also doesn’t specify what type of glass to use. The photo looks like a rocks glass, so that’s what I used too. Mine are 11.5 ounces, and this recipe made 2 cocktails.

Load more
This Bourbon Rosemary Cocktail is the perfect boozy lemonade sipper for the hot summertime weather. It's sweet and lemony, but the bourbon and rosemary flavors are still there. The instructions walk you through the fairly simple process of making the simple syrup and cocktail. Unfortunately, the total time listed for this recipe seems to only allow for simmering and cooling the simple syrup. I don't think it includes time to prep the syrup or make the cocktails, which ended up taking me twice as long. However, I loved that it also made just enough rosemary simple syrup for 2 cocktails. Also being able to use the simple syrup after allowing 5 minutes for it to cool was a big plus. This is a cocktail recipe that's going into my favorites list. I know how I'm going to use any extra rosemary this summer!Bourbon Rosemary Cocktail
Hungry PinnerPin, Cook, Eat, Review