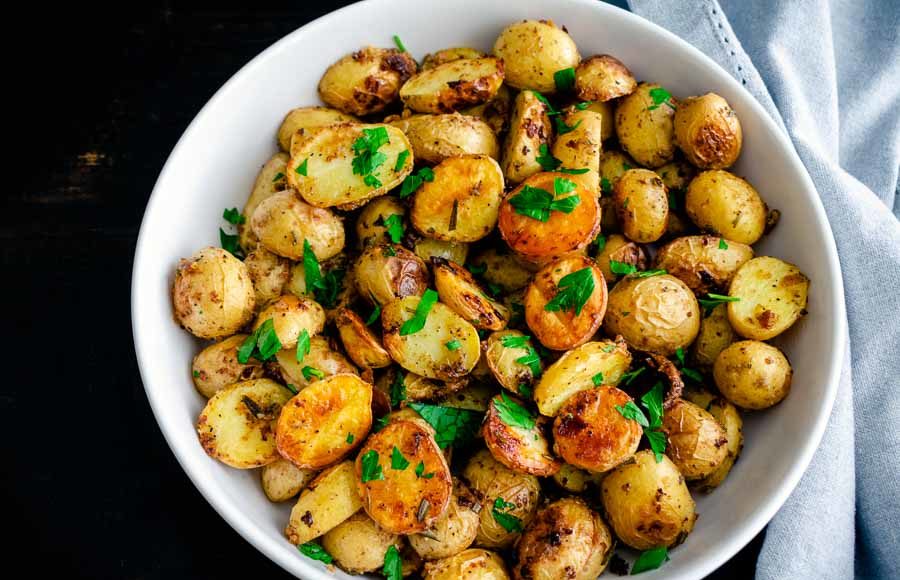 Bite-sized honey gold potatoes, ghee, rosemary, black pepper, salt,  stoneground mustard, and Is there anyone who doesn’t enjoy roasted potatoes? They’re like the chicken of side dishes: they’re versatile and everyone likes them in some form. Whether they’re part of the recipe or a side you add, potatoes can do it all. Looking back, I see that I’ve done a potato recipe every month since June. Hunh. I didn’t intentionally do that, but I’m going to continue the accidental tradition with this Roasted Herb Mustard Potatoes recipe. It looks like it will be an easy and tasty roasted potato side dish, and I’m here for it. Let’s give it a try!

These garlicky, herb and mustard roasted potatoes are baked to crispy perfection. This Whole30 and paleo side dish takes just minutes to throw together for an easy weeknight dinner and are delicious enough to be a crowd pleaser at any holiday meal.

Recipe Author: Bailey at Whole Kitchen Sink
Get the recipe

Eight ingredients is a medium-length, but you only have six if you eliminate salt and pepper. Not too shabby. I had to shop for everything else, but most of it wasn’t a problem. Stoneground mustard, fresh rosemary, and garlic are all pretty easy to find. I even managed to find ghee on the oils aisle (I thought it would be in the dairy case because…  butter).

The only item I was iffy about was the type of potatoes. The store only had regular size (fist size-ish) potatoes or tiny one-bite potatoes. I was hoping to find fingerlings, which are two-three bites, but no such luck. I bought the bite-sized yellow potatoes, but I was worried they would be too small and overcook. Eek!

I also bought some red potatoes as a backup. My thinking was that I could cut them into fingerling potato-sized wedges. I hate to plan for failure, but I can always use the backup potatoes for something else if everything works out.

The instructions for Roasted Herb Mustard Potatoes were simple and listed a total time of 35 minutes. I came close to that, but the slowdown was my fault. Before I explain that, here’s how my time was spent:

Now for the mistake that slowed me down a bit: I refrigerated my ghee after I opened it. It was rock hard, and I had to chip it put with a paring knife. Tip: Apparently, ghee belongs in the pantry so it keeps creamy consistency. Lesson learned a tad too late (if only bothered to read the packaging!).

So in between prepping the other ingredients and slicing the potatoes, I microwaved the ghee in 10-15 second bursts, stirring in between. It took a total of 40 seconds to melt it, and then I was able to mix it with the other seasonings.

Thankfully, the rest of this recipe went very smoothly. I halved all but a few super tiny potatoes and mixed them into the mustard seasoning. Then I popped them onto a sheet pan, making sure to put the cut sides down.

Almost forgot—I chopped some parsley to garnish while the potatoes were cooking. A quick transfer to a serving bowl plus a sprinkle of that parsley, and voila! A lovely side dish, if I do say so myself.

Load more
Roasted Herb Mustard PotatoesThese Roasted Herb Mustard Potatoes were a huge hit! They had a slightly crispy outside with a creamy middle, and the herb-mustard seasoning was so yummy. So, so yummy! I had some trouble because I refrigerated the ghee, but that was totally my fault. Everything else went very smoothly, and I was able to quickly melt the hardened ghee in the microwave as I prepped. I paired these with a simple lemon chicken breast, but I can see them as a side to darn near anything. These potatoes are going become to be one of my go-to recipes!
Hungry PinnerPin, Cook, Eat, Review