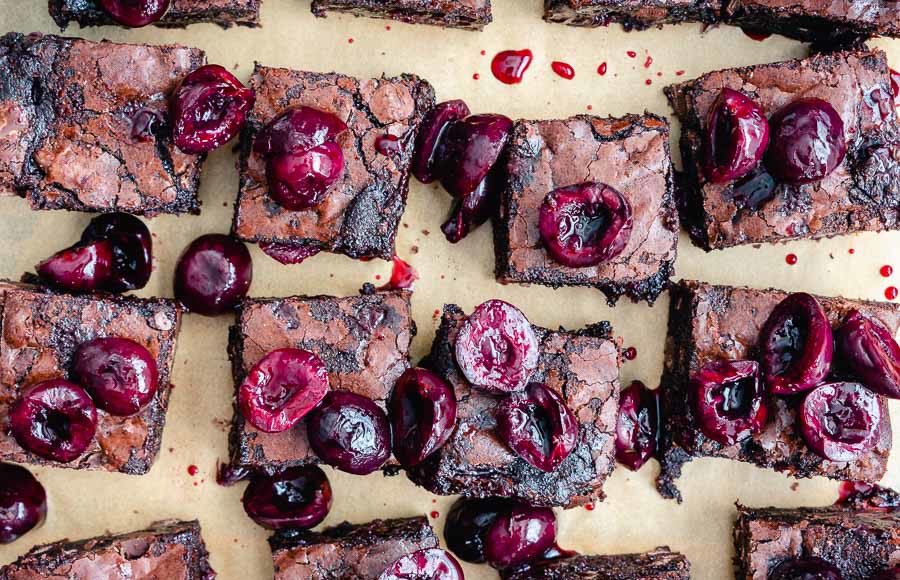 My cooler weather cravings for rich foods continue today with these Roasted Chocolate Cherry Brownies. I do have Golden Girl-level cheesecake cravings, but I have to admit to a pretty indiscriminate sweet tooth. For me, chocolate is right up there with cheesecake, so trying a brownie recipe was an easy decision. Not only are they brownies, but they are chocolate chip brownies with roasted cherries inside and on top. Yup, I need to try this recipe!

These cherry brownies are super fudgy chocolate brownies. They are filled and topped with roasted cherries.

Recipe Author: Stephanie Rutherford at Stephanie’s Sweets
Get the recipe

Brownies. Generally have a short list of ingredients, and this Roasted Chocolate Cherry Brownies recipe was no different. My pre-shopping check showed me I had 7 of the 11 ingredients in my pantry.

Most of the ingredients were pretty basic, but I did have some leftover Dutch process cocoa powder from Droste. It was something I had to order for another recipe, and it’s so much better than what I find at my local grocery store.

And speaking of the grocery store, I had a short shopping list. Just eggs, butter, semi-sweet chocolate chips, and cherries. The cherries were sold in 1-ounce bags, and I used nearly all of them.

Things kicked off with asking and pitting the cherries. I usually use a straw to pit cherries, but this time I used a paring knife and a small measuring spoon to scoop out the pits. The reason was the. Cherries had to be cut in half anyway, so why pit them and then have to slice them?

Next was roasting the cherries on a parchment-lined sheet pan. I generously sprinkled them with sugar first, and they caramelized beautifully. The roasted cherries basically made their own thick sweet syrup as they cooked.

I made the batter while waiting for the cherries to roast and cool. My stand mixer came in handy for mixing the liquids. I used a silicone spatula when was time to fold in the dry ingredients and half of the cherries.

I smoothed the thick batter into a square baking dish I had prepared with parchment paper sprayed with canola oil. The instructions say to bake until the edges are set, and that’s exactly what I did. The center was pretty jiggly straight out of the oven, but it set up as it cooled.

I ended up letting the pan cool overnight on the countertop. The next day I put the pan into the freezer for 15 minutes before slicing and topping it with the remaining roasted cherries.

The recipe lists 20 minutes to prep, 45 minutes to cook, and 1 hour and 5 minutes total. If I don’t count the time to cool, my total time would be just under that at 1 hour and 3 minutes.

Load more
My, oh my were thee Roasted Chocolate Cherry Brownies delish! Decadent chocolate chip brownies with roasted cherries inside and on top. So much yum! The recipe was very easy to follow, and I didn’t have a bit of trouble whipping up a batch. I loved that the final step included a reminder that the center would not be set, or I would have overcooked mine. The outside brownies had a firmer feel, but the ones in the center were so gooey and fudgy. The syrupy roasted cherries on top really made them special, though. Thi recipe is one I’m sure I’ll be making again!Roasted Chocolate Cherry Brownies
Hungry PinnerPin, Cook, Eat, Review