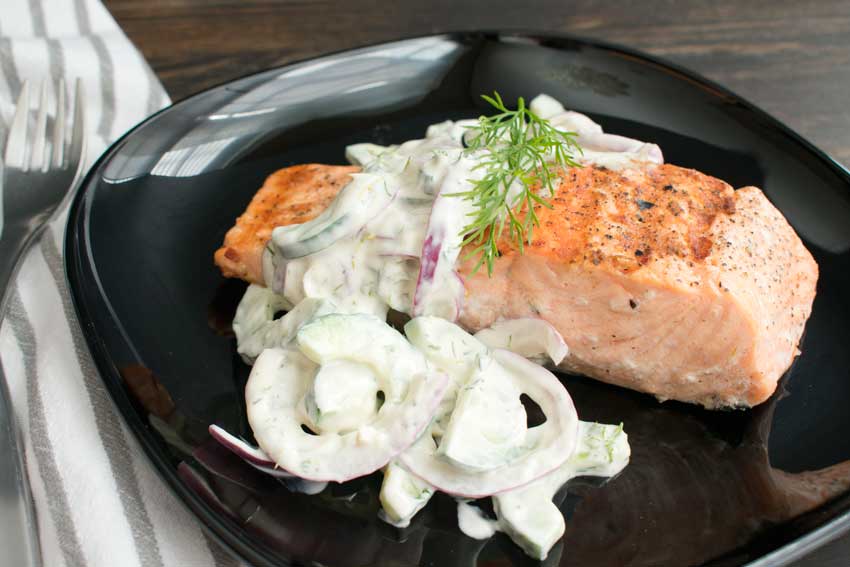 I keep seeing reports of snowstorms, but down here in Fort Lauderdale it’s been in the 80s. It’s already hot, and it’s only March! And I think this warm weather has put me in the mood for something a bit lighter. This Grilled Salmon with Creamy Cucumber-Dill Salad sounds like it will fulfill that craving. Grilled salmon paired with a cucumber salad sounds light and summery and healthy. And it’s a full meal with the main course and a side dish, so no need to worry about what to pair it with. Well, maybe the wine pairing…

Summer cooking is all about keeping it simple. No fussy sauces or heating up the kitchen, just good food made from fresh ingredients. This salmon, simply grilled with a tangy and refreshing cucumber salad over top, is just that.

Recipe Author: Jennifer Segal at Once Upon a Chef
Get the recipe

The list of ingredients for this recipe wasn’t too long, and it was mainly ingredients for the cucumber salad’s dressing. I had most of the basics like olive oil, mayonnaise, etc., but I did have to shop for a few things.

A salmon fillet for just over $15 gave me two large portions of fish (closer to 8 ounces each than the suggested 6 ounces). Then I had to pick up a few other fresh items like the vegetables and sour cream.

I was hoping the salad and salmon could be made at the same time, but that didn’t work out. The reason for that was the cucumber and onion had to be salted and sit for 30 minutes to draw out the water.

I used my mandoline to thinly slice the cucumber and onion for the salad, then I salted it while it sat in a large colander. While the vegetables sat, I was able to mix up the dressing. However,  I didn’t want to start the salmon too early and have it get cold. Cold salad is good, but cold fish–not so much.  I opted to wait until the salad was done before starting the fish so it would be piping hot.

It’s not outdoors weather everywhere right now, and I wanted to see if this dish could be prepared indoors. I decided to make the salmon on the stove using a grill pan.  Spoiler: it totally can! I used the times given in the recipe and got nicely seared salmon fillets. They were on the rare side, though, so you might want to add a few minutes if you prefer more well-done fish.

Here is how my time broke down:

Load more
Grilled Salmon with Creamy Cucumber-Dill SaladThis recipe was easy to make and made a simple but really tasty meal. I don't know if I liked the salmon or the cucumber salad the best, and they were the perfect pairing. The cucumber salad was creamy without being heavy. The dressing was tangy and packed with flavor from the garlic and herbs. I opted to make my salmon on the stove in a grill pan, and it turned out wonderfully. It had a nice sear on the outside and was moist on the inside. It was on the rare side, though, so you may need to cook it a bit longer if you like your salmon well done.
Hungry PinnerPin, Cook, Eat, Review