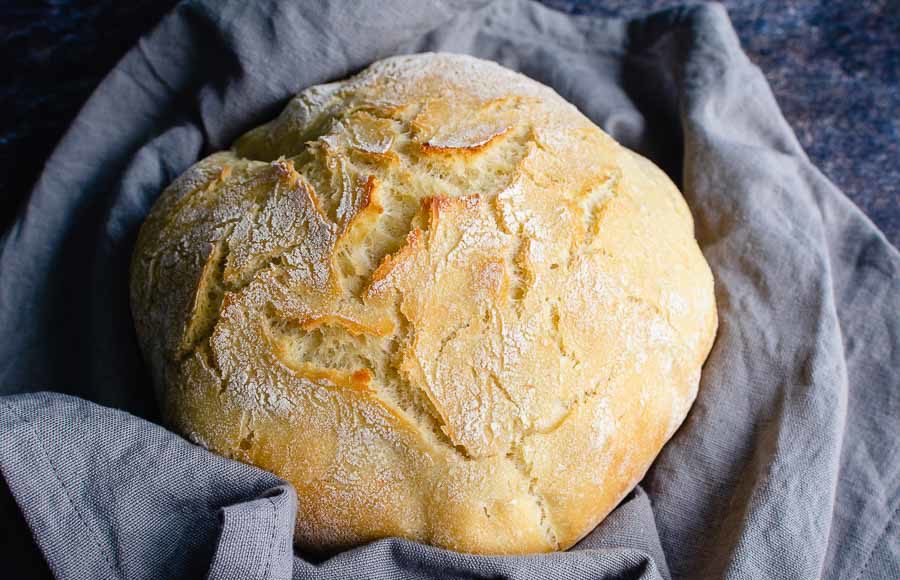 I have mentioned this Easy Crusty French Bread recipe in other posts, but I haven’t had the opportunity to fit it in as its own post until now. And unlike most of my posts, this isn’t the first time I have made it. In fact, in between discovering the recipe and taking the time to document my experience making it, I have made it 3-4 times. A couple of those were Pinterest failures, and I’m hoping my failures will help you not to make my mistakes. Let’s get into it!

Recipe Author: Jessie at Life as a Strawberry
Get the recipe

One day I was making a batch of Curried Cauliflower Rice Kale Soup when I decided it needed some bread on the side. I didn’t have any, so I zipped over to Pinterest to find an artisanal bread recipe.

This Easy Crusty French Bread recipe stood out because it could be made in a couple of hours, and I had all of the ingredients in my pantry. That’s right, absolutely no shopping was required. And although I had never made bread before, I decided to give it a go.

It does take a while to make this bread, but an hour and a half of that is simply waiting for the dough to rise. Another 40 minutes is baking, so the active time is pretty short.

Since I was (and really still am) a bread-making noob, I was so grateful for the tips, photos, and videos in the post. Once I read and watched, I felt like I could make bread (and I did!)

The recipe is long, but the author divides it into three manageable sections:

The total time listed is 2 hours 30 minutes. You also need to allow the bread to cool for at least 30 minutes before cutting, but it’s not clear if that’s included in the total time (I don’t think it is).

Here’s how my time was spent:

Mix the Dough and First Rise

The very first thing you need to do is proof the yeast. It’s simple to do, but it will make or break your recipe. To do it, just add the yeast, sugar, and warm water to a mixing bowl. Then wait five minutes for the yeast to begin to foam.

Foaming yeast is what gives your bread those airy bubbles, and the opposite is also true. Tip: Hot tap water is perfect for this. I found out the hard way that too hot will kill the yeast, preventing it from foaming. The result will be a giant bread hockey puck that’s inedible.

Measure out your flour while the yeast is proofing. I took the author’s advice and weighed out the flour on my kitchen scale. I did measure everything else—getting used to measuring while baking is hard for me.

Once the yeast has proofed, add the flour and salt and mix. The recipe says to add the salt after mixing in the flour, but this led to my second bread failure. Tip: Salt is a must for the flavor, so I mix it in with the flour to make sure I don’t forget it.

There is an option to use a stand mixer with a bread dough hook, but I did it all by hand. A wooden spatula mixed the dough nicely. Once mixed, place a tea towel over the bowl of dough and take a one-hour break while the dough rises.

This is where the fun starts! I floured my largest cutting board and a linen napkin and got to shaping the dough. It went just like the video, and I was really feeling confident at this point.

Yes, the dough was sticky, but nothing a bit of cold water and flour couldn’t handle. Five minutes later I had my dough shaped and resting in a cloth-lined mixing bowl. I don’t have a proofing bowl, but that has never been a problem. Any old mixing bowl will do, apparently.

After folding the napkin over the newly shaped dough, I preheated the oven. Tip: Make sure you preheat your Dutch oven (lid and all) if it’s cast iron. I used a round 5-quart cast-iron Dutch oven and found it to be a perfect size. Don’t have one? The post gives a range of 4-6 quarts as the ideal size, and even links to a post with other methods.

After that, take another break! You have 30 minutes until the second rise is complete.

This is where the magic happens! I took the author’s advice and used a piece of parchment paper to lower my dough into the preheated Dutch oven. It was hot, so I kept my heavy-duty grilling gloves on throughout the process. Unlike oven mitts, they have fingers that make it much easier to use your hands.

Then I replaced the lid, put the pot back into the oven, and took another 30-minute break. Seriously, there is a lot of inactive time in this recipe, not that it’s a bad thing.

After half an hour, I removed the lid and continued baking for 10-15 minutes. Sometimes I found the bread was browned enough after 10 minutes, and sometimes it took 15. You really have to keep an eye on it at this point.

When the bread was done, the parchment made it easy to remove from the pot and transfer to a cooling rack. It smelled so good that waiting 30 minutes more for it to cool was torture! Believe me, I was right there with a bread knife when that timer dinged.

Load more
Easy Crusty French BreadThis Easy Crusty French Bread is so good that I might never buy another loaf of bread! My husband and I devour it every time I make it. I was surprised at how easy it was. I had a lot of trepidation before I made my first loaf, but it tasted like it was from a bakery. The accompanying blog post has tons of tips and tricks, photos, and even a few videos to show you exactly how it's done. The ingredients might even all be in your pantry! Best of all, this bread is ready in a few hours and doesn't require an overnight rise. It's an overwhelming Pinterest success that I have already made several times. It's a keeper!
Hungry PinnerPin, Cook, Eat, Review