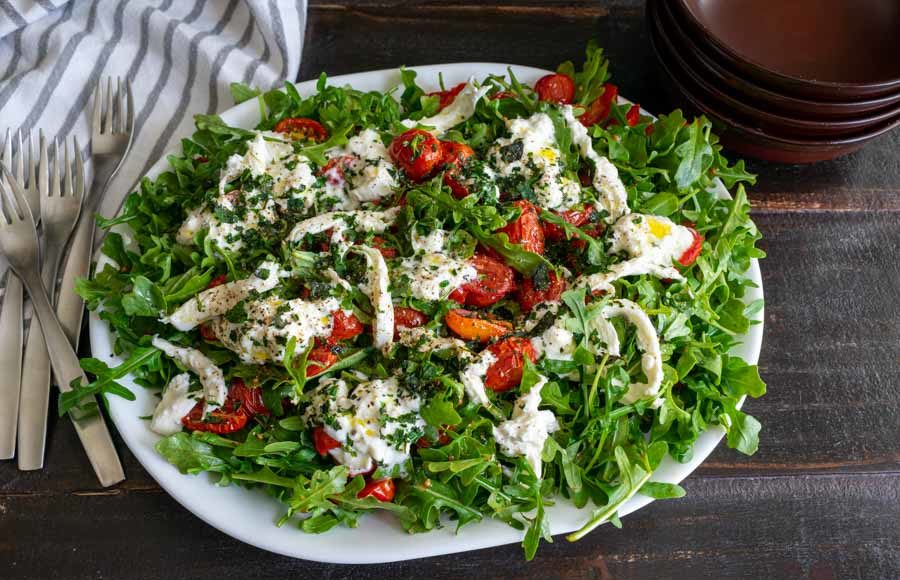 I have a problem… with raw tomatoes. I just don’t like them. They’re okay in things like pico de Gallo or anything that has enough other flavors to cover up the raw tomato taste. This is, at worst, an occasional minor inconvenience for me. However, it completely eliminates Caprese salad from my diet. Those beautiful salads made of fresh mozzarella, sweet basil and slices of tomato drizzled in olive oil. They look so lovely, but I just can’t deal with the raw tomato. Well, this Arugula with Slow-Roasted Cherry Tomatoes and Burrata recipe might have solved that problem. Let’s find out!

An off-season version of Caprese salad made with roasted grape tomatoes, burrata and peppery arugula.

Recipe Author: Emily Pater at West of the Loop
Get the recipe

One of the appealing things about this recipe was the fact that it only has a handful of ingredients. I had to shop for most, but my regular grocery store had most everything.

Unfortunately, the packages of tomatoes weren’t measured in pints. They were measured in pounds, and I’m clueless on how to convert a measurement of volume to weight. I ended up just guessing that two pounds of grape tomatoes would be enough since it looked like a lot.

And I picked the day they were out of fresh basil. Fortunately, I had some lightly dried basil on hand, so I substituted that. One container is the equivalent of a large bunch of fresh basil, so I used about half to approximate a small bunch of basil.

Preparing this salad wasn’t difficult at all, but it did take some time to roast the tomatoes. Three hours, to be specific. I planned to have this salad with dinner, so I started it just after lunch.

Since I’m a perfectionist, I cut each tomato individually and didn’t use any shortcuts. (I know, I’m nuts!) It didn’t take long, though, and I had them ready to go into the oven in seven minutes.

It’s not in the ingredients list, but the instructions say a sprig of rosemary or thyme may be added to the tomatoes. I happened to have some fresh oregano, so I added it to the sheet pan. I’m not sure it imparted much flavor, or it was extremely faint if it did.

I finished putting the salad together once the tomatoes were done. It gave them a few minutes to cool down, and they did cool down pretty quickly.

Although I served the salad on a platter, it was easier to mix it in a large bowl and transfer it to the platter. That way the liquid from the roasted tomatoes thoroughly coated the arugula leaves and acted like a salad dressing.

Once they were transferred to a plate, I finished up by topping the salad with the burrata, olive oil, basil, salt, and pepper. Here’s how my time was spent on this recipe:

Load more
Arugula with Slow-Roasted Cherry Tomatoes and Burrata is the Caprese salad substitute I needed! It has all the things in the classic Caprese that I love: fresh mozzarella, basil, and olive oil. The addition of arugula adds some crunch, but it's the slow-roasted grape tomatoes that are the game-changer since I can't stand raw tomatoes (I wish I could!). This colorful and tasty salad only has a few ingredients and was easy to prepare. However, I was a little confused as to why the title said cherry tomatoes and the ingredients called for grape tomatoes. I'm guessing the fact that grape tomatoes are easier to find might have had something to do with it. But I'm sure this salad would have been just as scrumptious with either one!Arugula with Slow-Roasted Cherry Tomatoes and Burrata
Hungry PinnerPin, Cook, Eat, Review