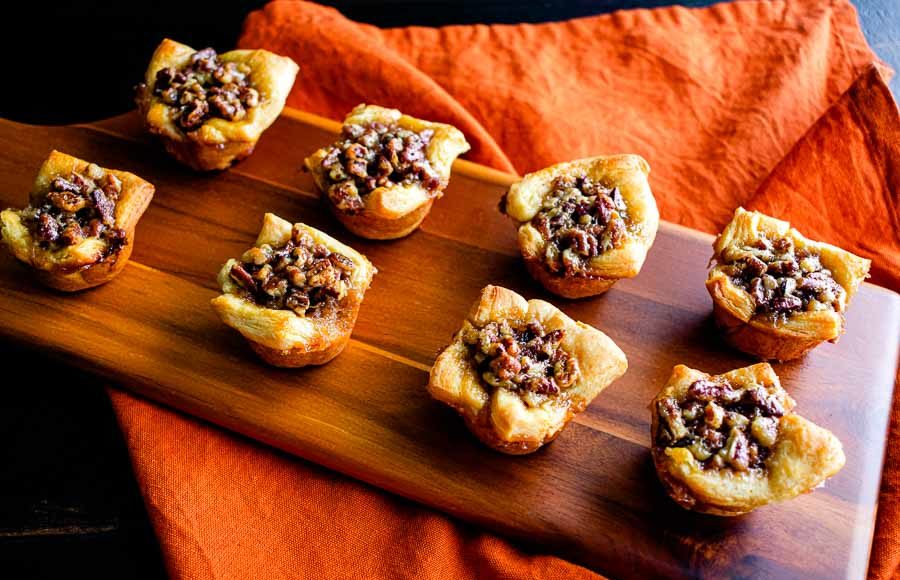 I make my Thanksgiving menu months ahead of the big day, and I thought I had this one worked out ages ago. I planned to make pecan pie cupcakes, but the closer it got to baking time, the less I wanted to make them. It wasn’t because I wasn’t looking forward to eating them—I was just exhausted, and making 36 cupcakes and buttercream frosting from scratch sounded like climbing a mountain. Then I stumbled on this Pecan Pie Bites recipe the night before I was planning to bake, and I went for a last-minute menu change. It was the best idea!

The stress of baking a fresh pecan pie on Thanksgiving is unnecessary. These bites are so simple to whip together with very little forethought. Crescents provide a buttery flaky crust for the classic pecan pie filling. It’s a Thanksgiving miracle.

Recipe Author: Makinze Gore at Delish
Get the recipe

I usually have a few things on hand, but I had almost everything in my pantry and refrigerator. Yay!

A quick search through my pantry and I found brown cooking spray, sugar, vanilla extract, kosher salt, and pecan pieces. The recipe does call for roughly chopped pecans, and I was planning to buy pecan halves and chop them myself. This saved me a step.

My refrigerator was holding onto some butter, the egg, and a bottle of corn syrup. It ended up there after I opened it, and it was still perfectly good. All I had to do was set it on the counter to warm to room temperature.

The only thing I had to buy was the tube of crescent rolls. This part seemed easy, but it turns out I bought the wrong size. I had no idea crescent rolls come in 8- and 12-ounces. I bought the 12-ounce tube (the “Grands!” label should have clued me in), but the recipe calls for the 8-ounce size. No biggie—it all worked out.

This recipe looked so easy in the video and the 5-minute prep time seemed too good to be true. Well… it was. That’s not to say this recipe wasn’t easy! This is how my time was spent:

The dough was the most difficult part, and some of that is on me. I think the shape of the dough I bought was more rectangular than the dough from the video. I noticed that as I rewatched the video a couple of times so I could see how the dough was cut into 24 squares. (Here’s a clearer guide to cutting the dough.)

I did it wrong the first time and ended up with 18 pieces. But the dough is forgiving, and I was able to pinch it closed and re-cut it. The pieces were more rectangular than square, but I was able to stretch them a bit as I placed them into the mini muffin tin.

Next up was mixing the filling, and that was super easy. Literally, put everything into a mixing bowl and stir to blend. I used a small spoon to fill each cup, and I ended up with something that looked a lot like the video.

All the work was done, and it was time to bake my Pecan Pie Bites. I started off at 15 minutes, and that was perfect. Unfortunately, the reality is messier than Pinterest videos, and the filling bubbled over. A lot.

I left the pan cool for 30 minutes, and slowly removed each bite. The baked-on filling was still flexible, and I gently pried off the difficult spots with a paring knife. Tip: Don’t wipe off the extra cooking spray before baking. I did (I was trying to be neat), but it would have helped with the removal situation. I didn’t time this part, but it took me a lot longer than I imagined.

Load more
These Pecan Pie Bites really are a Thanksgiving miracle! Buttery crust and sticky sweet pecan filling--just like pecan pie with far less work! They were simple to make but not quite as easy as they looked in the video. I had some minor hiccups along the way and they took me a bit longer than the time listed. However, the result was so good that I'm calling them a Pinterest success. They did not last long--we devoured them!!Pecan Pie Bites
Hungry PinnerPin, Cook, Eat, Review