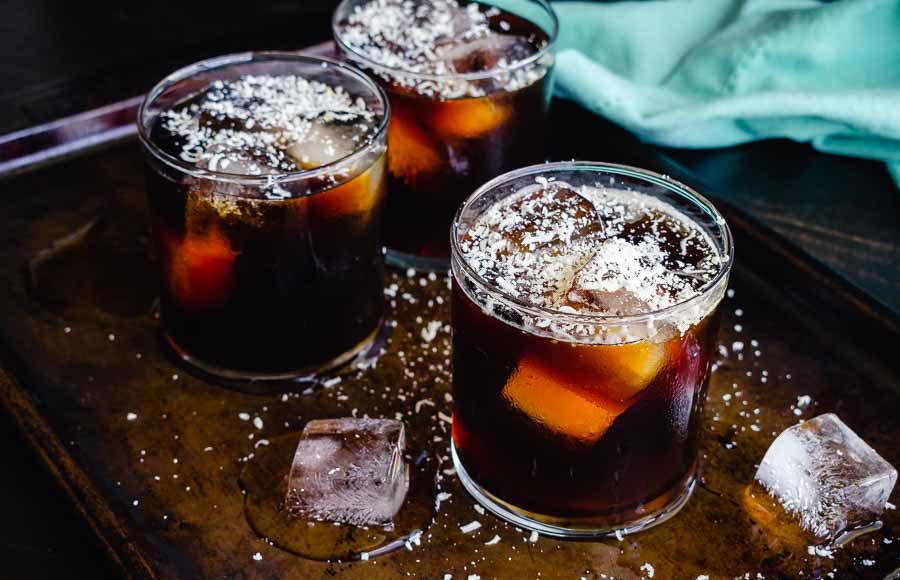 Three things I love are bourbon, coffee, and chocolate (not necessarily in that order). Any one of them is a treat; combine two and I’m in heaven. But all three? Now you’re talking! This Coffee Old Fashioned does just that, and I’ve been wanting to give it a try for a while. Since I don’t drink coffee too often, I decided to wait for a weekend to make this recipe for brunch. It was a nice way to spend a lazy Sunday morning, although the caffeine made an afternoon nap impossible. Oh well, giving up a nap was a price I was willing to pay!

A timeless Old Fashioned recipe with a caffeine kick. One of the original American cocktail recipes, this tipple adds cold brewed coffee for something unusual.

Recipe Author: Craft Spirits by DK Publishing via The Happy Foodie
Get the recipe

Since this cocktail was a real treat, I went all out on the bourbon with a bottle of Knob Creek. I find the higher proof stands up well to coffee and doesn’t get overpowered by it.

Speaking of coffee, I bought a bottle of brio! cold-brewed coffee just for this recipe. I don’t drink coffee too often, so I didn’t want to make a big batch. However, if cold brew is your jam, I have a simple cold brew coffee recipe for you. All you need is coarsely ground coffee, water, and some patience.

Next up was the creme de cacao. I had a bottle of dark cocoa, so I used that. It has a stronger chocolate flavor than the blanc, and I like that with the strong bourbon. The final touches were orange bitters and some a white chocolate bar.

Since I bought ready-made cold-brew coffee, I was able to get right into making the cocktails. There isn’t a time listed, but a single cocktail took me 4 minutes to make with the garnish.

The process was so simple. Simply add everything except the coffee to a cocktail shaker filled with ice, shake, and pour over an ice-filled double old-fashioned glass. Top with the cold-brew coffee and garnish with some grated white chocolate.

Making your own cold-brew coffee adds a few more steps and an extra 24 hours, but it isn’t difficult at all. When I make it, I like to grind the coffee beans myself. It gives the coffee a smoother taste, and it’s just more convenient for me.

Load more
This Coffee Old Fashioned is a tasty caffeinated take on a classic cocktail! Sweet coffee and bourbon are the foremost flavors, with a touch of chocolate thrown in for good measure. Making this cocktail was quick and fairly easy, especially since I used store-bought cold-brewed coffee. I did find myself skipping around the list of ingredients looking for the measures, though, because they weren't presented in the same order as in the instructions. I also didn't care for the texture of the grated white chocolate, and I ended up skipping it after my first few tries. It was pretty for the photos, though!Coffee Old Fashioned
Hungry PinnerPin, Cook, Eat, Review